This week my "Take Three" column (every Sunday, three write-ups on three performances in a supporting/character actor's career) over at The Film Experience features Michael Biehn in The Terminator, Aliens and The Abyss.

The 1980s. Male. Character actor. Sci-fi. Aliens from deep, dark space and the deep blue sea and robots from the future. All under the tutelage of James Cameron. 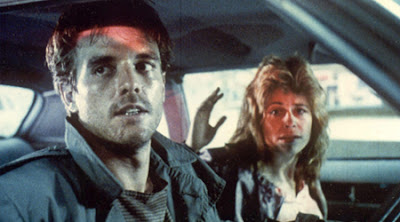 Take One: The Terminator (1984) It’s a good thing the T-800 didn’t find Sarah Connor any sooner than he did. He would’ve consequently deprived us of all that full-throttle Biehn action and indeed made The Terminator a very short movie, nay, franchise. (Found her! The end.) As the main man from future times, resistance fighter Sgt. Kyle Reese is electrically plonked down butt-naked from post-apocalyptic LA, circa 2029, to present-day 1984 to protect poor baffled Linda Hamilton. Biehn delivers a sturdy yet tender supporting turn. The Austrian Oak was obviously the big draw but this film triggered Biehn's signature part: the slightly wracked, occasionally cracked and often knackered hero...

Read the rest here
Posted by Craig Bloomfield at 09:39