Here's a second review-conversation (with fellow The Film Experience writer David Upton) on new indie romantic-drama and Sundance hit Like Crazy which is showing at the 55th BFI London Film Festival.

To reiterate: it was decided that on the few occasions that David and myself happened to be at the same screenings, we would post up a 'review-chat' instead of a more standard review for the purpose of mixing it up with our LFF reports (and for the readers of the site to find out about films playing at the festival in a different way). 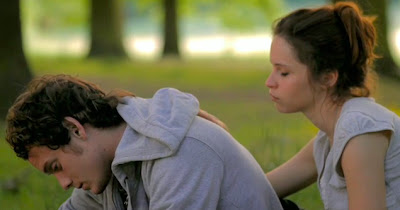 Anton Yelchin and Felicity Jones are happy-sad in Like Crazy
Craig: I think the cuteness of the pairing was the thing director Drake Doremus seemed to want to eagerly translate the most, what with all the chair inscriptions and diary notes. (Clearly that chair wanted to be Like Crazy’s “Rosebud”.) Haven’t we seen this kind of meet-cute cinematic dalliance before, in things like Garden State, Elizabethtown etc? I was over quirk-filled romanticised moping the moment it began...

Read the rest here
Posted by Craig Bloomfield at 18:10