I saw a quartet of documentaries at the London Film Festival this year. Two probed the minds and personalities of their respective subjects in odd, amusing, though perhaps not always entirely successful ways (Shock Head Soul, Lawrence of Belgravia), and two more split their investigations into their subjects' lives into chapter-like, bite-size sections to perhaps display a clearer grasp on them (Dragonslayer, Whores' Glory). Here are the first two (the second two later in the week):

Shock Head Soul, an experimental documentary of sorts, strains perhaps too hard for an intensive effect. Director Simon Pummell takes a very formally strict, intelligent approach to his subject (as he similarly did with Bodysong), but the results, to my eyes and ears at least, felt overbearingly rigorous, far too dry and granite-like to allow easy passage into the environment he conjures up. Pummell has made an attempt to pepper his narrative – that of Daniel Paul Schreber, a former judge who received ‘messages’ from God and was committed to an institution – with slightly off-the-cuff imagery, but he neglected to vary the general tone of his visual sensibility or intellectual argument. It became quite hazy, dull even, and I have to say I became frustrated with its monotonously severe approach. Talking-head appearances from cultural, historical and science experts (particularly Ian Christie, who is engages with several insights), all surrounded by weirdly unreal yet austere backdrops (think the sets of Dune refashioned into a courtroom!), open up Pummell’s inquiries and inject some straightforward context to the film. 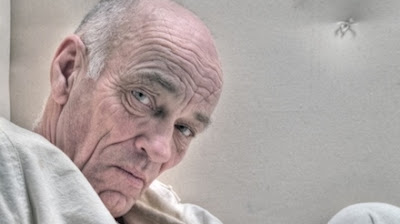 It’s ultimately dry as a buzzard’s tongue and as shapeless as a disjointed limb. Even the occasional refreshing and unexpected image (in particular, a shot of Daniel’s head showered by gushing water from above, which renders him as a kind of soaked, ever-mutating beast) can’t sustain enough energy to combat the dull, heavy thud of the film’s overarching message. Another sporadic set of images did make me sit up and take notice, however: every so often Schreber can be seen typing alongside an eerie and otherworldly Cronenbergian shape - a cross between half a tennis ball and a Matrix-like pulsating metal squid/typewriter (yes, that's right), whilst red strands of vaporous light wind their way around austere rooms. This imagery promised a visual jaunt into surreal territory, or at least a daft diversion into sci-fi. But it comes and goes, making little overall impact. Colour me indifferent.

Lawrence of Belgravia is another portrait of a singular, troubled soul. This one, the Lawrence of the title, was the frontman in 1980s band Felt and now a self-proclaimed, and very much self–promoting, musical “maestro”. It’s a much more grounded documentary than Shock Head Soul, one with a level, matter-of-fact approach that matches its general visual flatness. Lawrence's amiable enough but hazily articulated commentary on the state of the music industry’s ups and downs does, sadly, come via the whiff of bitterness and disappointment of a perennial near has-been. He’s an affable presence part of the time and partly sour at the world the rest of it. His is a curious approach to life, but he too often appears clueless toward his own failure and heavy with disdain for the world of the "average" person – incidentally enough the kind of people who might have bought (or not, it seems) his music back in the day. His affability slips and a blundering kind of commentary becomes de rigueur. Occasional moments of good-humoured introspection and do shine through though. 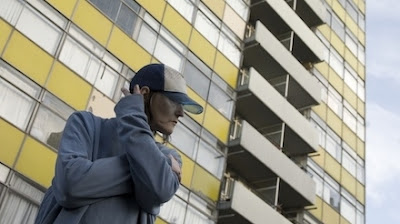 Lawrence is perhaps either a dim sage or some kind of accidental icon. Through this film he’ll either duly delight fans of typically obscure or cultish British music, or just plainly baffle folks who may want insights and coherent reasoning on his particular take on how the music industry treats its former try-hard performers. Director Paul Kelly has a keen eye for crisp compositions and occasionally a handsomely shot image – a high-angle tower block shot, a snappy collage of slogan-plastered walls etc – does jazz up the mood. But much of the film’s aural aspects left me wanting: I personally couldn’t, for love or money, get any decent listenable purchase on the soundtrack (mostly composed of Felt and/or Lawrence-penned ditties) and instead of connecting with me, its constant intrusion distanced me further from the man at the centre of the film. Still, it’s not a dull film, all told, and a few wry smiles are to be had throughout. I’d recommend catching it when it inevitably crops up on television, however. It's got More4 written all over it.

Both films play at the LFF this October