It's Bafta time again. The 2012 Film Awards take place in London this evening. I'll be rooting for Tinker Tailor Soldier Spy to hopefully sneak off with a few awards. I wrote a piece, below, celebrating the film, championing it as a worthy Best Film winner.

Like last year (as with my Black Swan write-up), I was asked to contribute a piece on the film for the official 2012 Bafta brochure. You can read it by clicking on one of the links below. It's available to view as an eMagazine, so click on the cover you like the most, or the film you're rooting for, and read on...

Here is the link for the Film Awards 2012 page (which includes the brochure). Alternatively, here is a link directly to the page of my Tinker Tailor Soldier Spy piece. Also, the other four films nominated have fantastic pieces written for them: Nev Pierce on The Descendants, Mark Kermode on The Artist, Siobhan Synnot on The Help and Jamie Russell on Drive.

And below is the wonderful cover illustration by Eda Akaltun, who designed and illustrated all five Best Film nominees. 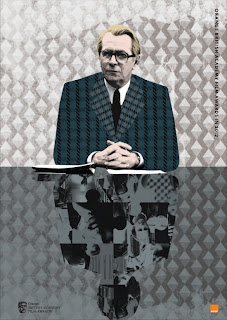 Posted by Craig Bloomfield at 13:26