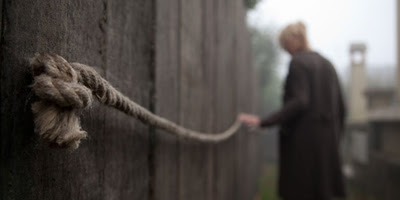 Julia's Eyes  Los ojos de Julia (Guillem Morales/Spain/112mins)
A house at night: a basement, a noose, a blind woman; a figure lurking in a dark corner. A street-wide power cut both abruptly halts the action and cranks up the tension. Then, a cut to an observatory elsewhere. Mystery follows – and what mystery. It’s all about looking, not seeing and what is or, possibly, isn’t there. The opening scenes of Julia’s Eyes were a gripping exercise in how to draw an audience in with swiftly orchestrated suspense. Guillem Morales’ stylish, efficient horror-thriller, produced by Guillermo del Toro, succeeded in evocatively adding a shot of pure high drama, amid the ink-dark imagery, to one of 2011's best horror films. The premise (a woman with a degenerative eye disease battles real and/or unreal terrors in the hope that she doesn’t befall the same fate as her twin sister) may have felt slightly shopworn, something from the likes of The Eye (2002) and 1994’s Blink, but instead of strictly following narrow genre patterns Morales crafted his story after themes found in much earlier horrors: ‘70s and ‘80s gialli by Dario Argento, Sergio Martino and Co. (There’s a whiff of Brian De Palma, too – and of course Hitchcock.) The need to discover what’s behind the mystery takes hold incrementally through a series of memorable scenes (a creepy chase in the underbelly of a building, lit only by the glare of a mobile phone; a tense escape attempt in a shower room full of blind women; an archetypal – yet still unnerving – close-up of a knife edging toward an unseeing eye) and rarely lets the tension cease. It played like a film equivalent of an addictive pot boiler: a moody, gripping tale that hinges on one intriguing plot turn after another; each one adding more intensity before veering off down unexpected avenues toward an increasingly wrought and gloriously delerious finale. Belén Rueda gave a strong, fearless performance as Julia. You experience each sting and jolt alongside her every step of the way. And Lluís Homar, Pablo Derqui and Julia Gutiérrez Caba provided fine support. I look forward to more within the horror genre from Morales. He's got the style and the smarts for career longevity.
Posted by Craig Bloomfield at 19:31