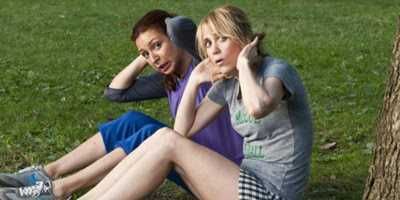 Bridesmaids (Paul Feig/USA/125mins)
Whilst it largely follows a set template for many American comedies of recent years, Bridesmaids is much more than a standard comic concoction. It’s more layered and subversively anarchic than it being just a female-centred take on a riotous rom-com. It got lazily labelled as a female The Hangover, or a Knocked Up-style reply from an opposing viewpoint, but these assumptions, while only partially founded anyway, miss what made it so refreshing and actually rather caustic. It’s not an average My Best Friend’s Wedding (or similar) comic-romance affair either. Here, the usually inviolable “girly” movie setting of a bridal boutique is soiled with shit and vomit. Better than simply an instance of scatological folly, it’s evidence that Bridesmaids is staging a distrustful and playful assault on marital etiquette and tradition. (And it’s performed with great sense of timing and care of character.) More than these moments being just a case of the girls out-grossing the boys, it shows the men just how much weak sauce they’ve been dealing in over the years. The plot may have been erratic and episodic – yet formed out of humorous experiment – but it revels in all the pleasures of the improvised set piece with naturally hilarious abandon. In fact, the loosely arranged and comically piecemeal nature of, say, the drunk-on-the-plane sequence or the bridal party ‘speech-off’ set Bridesmaids apart. It followed a pattern, but wasn’t afraid to skip off on a daft path when required. The humour escalates farcically, but through joyful endeavour and the crucial sharpness of a cast of talented women, it feels loopily immersive and wonderfully unlaboured. It’s both a cynical swipe at wedding mores and an affectionate acknowledgement of them; it has its wedding cake – and destroys it. Seemingly deluded yet compassionately drawn characters aren’t often so singularly spotlighted in such films the way Annie Walker is here. (For me, Kristen Wiig gave the performance of last year, though Rose Byrne, Melissa McCarthy, Maya Rudolph, Wendi McLendon-Covey and Ellie Kemper all shine in the main roles.) Annie's behaviour, mostly uncommon in the genre, was realistically awkward and – in my healthily cynical mind – entirely defensible. She was all about the connection over the pomp. And good for her. Director Feig, Wiig and (co-writer) Annie Mumolo play the wedding game beautifully. They champion togetherness, but equally pride daft misanthropy as worthy of comic exploration.
Posted by Craig Bloomfield at 18:45