This week my "Take Three" column (every Sunday, three write-ups on three performances in a supporting/character actor's career) over at The Film Experience features Anne Heche in Birth, Cedar Rapids and Psycho (1998). 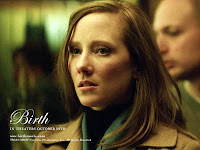 Take One: Birth (2004) Whilst watching Birth I’m sure you, like me, were thinking: just what the heck is Anne Heche doing in Central Park? Near the start of Jonathan Glazer’s reincarnation baffler Heche acts in mysterious ways. She suspiciously sneaks out of a hotel lobby and onto the snowy streets of Manhattan. She’s rustling around in the bushes, digging a hole. Is she burying the gift intended for Anna (Nicole Kidman)? Is it even a gift? It looks like some sort of proof, evidence. Her character, Clara, holds the film’s secrets from the get-go. In accordance with the way Glazer structures the script in these early scenes, fragmented by Sam Sneade and Claus Wehlisch’s editing, Clara becomes an enigma we know we'll worryingly come back to later...

Read the rest here
Posted by Craig Bloomfield at 20:08