This Sunday my "Take Three" column (every Sunday, three write-ups on three performances in a supporting/character actor's career) returns for its third and possibly final series over at The Film Experience. First actor up is Melissa Leo in Red State, Mildred Pierce and Frozen River. 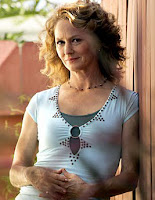 Leo gives an ugly yet riveting supporting performance as Sara in Kevin Smith’s Red State. She’s the matriarch with no maternal manners of the Five Points Trinity Church and wife to Michael Parks’ Phelps-like religious nutjob. We first see her open a trailer door to three horny teens who, we eventually gather, she entraps with the promise of a ‘good time’. She’s chugging a beer, resignedly eyeing these unsuspecting victims, playing her part in their “punishment”. Leo makes Sara immediately unlikeable. She’s a fully paid-up cult member either lost in ecstatic zeal (when Parks’ Abin spouts his bile-filled sermons) or riddled with utter contempt for ‘outsiders’ (all other times). But at no point does Leo deliver a two-dimensional portrait of hatefulness...

Read the rest here
Posted by Craig Bloomfield at 19:57