This week my "Take Three" column (every Sunday, three write-ups on three performances in a supporting/character actor's career) over at The Film Experience features Michael Rooker in Slither, Cliffhanger and Henry: Portrait of a Serial Killer. 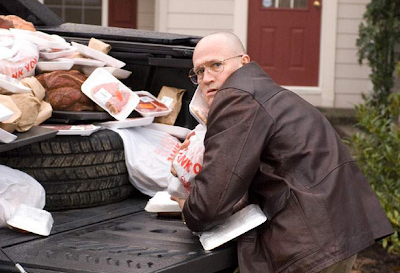 Take One: Slither (2007) Rooker has a very bad time of it in Slither. For starters, he plays a brute and tyrant, and is almost pathologically cocksure of his local status as a small-town car dealer. He’s horrible and unfaithful to his wife and his name, Grant Grant, is doubly dumb. So when he’s “killed” by an alien parasite in a meteor which re-animates him as a mind-absorbed, ET-hosting slug-mutant, you don’t exactly sob over his lot in life. But things get worse: he has a future as the head of a fleshy multi-person blob – the kind of thing that Brian Yuzna or David Cronenberg might cook up after particularly eventful dreams – to look forward to. Before that, Rooker leaves a slime trail of extraterrestrial carnage...

Read the rest here
Posted by Craig Bloomfield at 20:09