This week my "Take Three" column (every Sunday, three write-ups on three performances in a supporting/character actor's career) over at The Film Experience features Ida Lupino in The Bigamist, On Dangerous Ground and Jennifer. 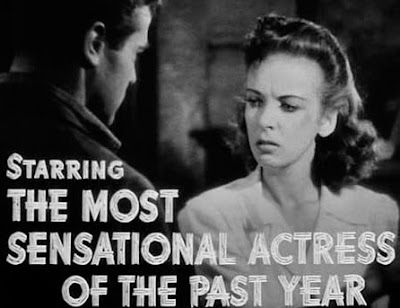 Take One: The Bigamist (1953) The Bigamist probes unseemly marital behaviour and stews on moral sorrows. At its centre is Edmond O’Brien toing and froing between two wives. But behind the camera as director, and in a supporting role as O’Brien’s second, San Francisco wife Phyllis Martin, is Ida Lupino. Her unfussy direction creates lean drama and her performance beautifully matches it, with nary an unnecessary furtive glance or superfluous line spoken. She’s a woman bored on a bus tour of Hollywood stars’ homes, chatted up by O’Brien’s depressed bigamist Harry Graham...


Edmond as Harry: "Haven’t you any interest in how the other half lives?"
Ida as Phyllis: "No, not particularly.
I’m just crazy about bus rides – gives me a chance to get off my feet.”

Read the rest here
Posted by Craig Bloomfield at 15:14