This week my "Take Three" column (every Sunday, three write-ups on three performances in a supporting/character actor's career) over at The Film Experience features John C. Reilly in Terri, Step Brothers and Magnolia. 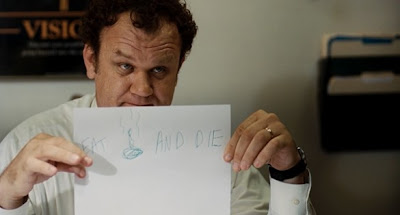 Take One: Terri (2011) The last couple of years have brought Reilly a trio of great dramedic roles. He showed real range in a slight but noteworthy career shift from his usual broader comedies to Cyrus, Carnage and Terri. The third film which is about the lonely life of an overweight high school outcast (Jacob Wysocki) was a particularly great role for Reilly. He was unassuming, believable and much more curiously sombre than in most of the roles we've seen him play to date. (He also played Tilda Swinton’s husband in We Need to Talk about Kevin last year, though his role was largely, though I'd argue unfairly, labelled as miscasting.)...

Read the rest here
Posted by Craig Bloomfield at 07:05