At the Cinema: Magic Mike 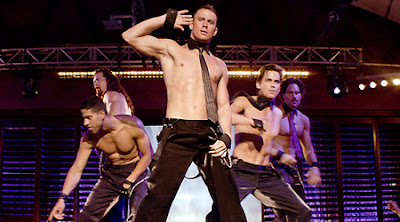 The promise that Steven Soderbergh’s Magic Mike is 110 chunky minutes of Channing vigorously shaking his Tatums at the screen is tempered slightly by the fact that it does actually have a story to sketch out in between the ab-flashes and slipped-out nips. Decent guy stripper/roofer/bespoke furniture-maker Mike (Tatum) reluctantly introduces The Kid (Alex Pettyfer, not credited with a proper name so I may as well call him Mike too) into the life of the Tampa Bay strip circuit: at first times are fun; then times are bad. This is the gist of it all. There’s some hazed yellow-tinged Florida scenery (courtesy of DoP Peter Andrews aka Soderbergh himself) balanced with many sweaty-chested interludes to wink-nudge us along on this nearly-rags-to-kinda-riches tale. It doesn’t quite nail the cosy sleaziness that made Boogie Nights a tragic yet game example of the boy-(eventually)-makes-good genre, nor does it have its staying power, but it does have pocketfuls of charm. Tatum’s skittish romance with The Kid Mike’s disapproving sister Cody Horn is entirely winsome and shows that these two could fill a whole film of their own, in the manner of Before Sunrise/Sunset, with just their idle flirty banter. Matthew McConaughey as the strip club’s still-fit veteran honcho plays his scenes with raffish poise. He’s such an accomplished performer that any director must breathe a sigh of relief when he signs on to their project; fuss-free professionalism comes as standard with him. The rest of the strippers played by Matt Bomer, Joe Manganiello, Alex Rodriguez and Kevin Nash (let’s call them all Mike) don’t get much of a look-in personality wise, but they do play, respectively, a Ken doll, someone with a big dick, a fireman and Tarzan very capably. 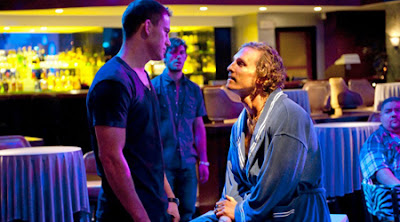 The plot flip-flops between sunnier days (everyone drinks copious amounts of beer anytime, anywhere) and a few grim nights (everyone does copious amounts of drugs anytime, anywhere) with rapidity. We get an essence of struggle and a sliver of bleakness, but nothing substantially dramatic enough to fully invest in those straining in the dark. But Soderbergh knows that a handful of becoming characters frequently and affably delivering some decent lines with little haste means we won’t necessarily dwell on anything too sinister lurking in the background. (Was the girl played by Riley Keough dead the morning after the blow-out party? The film leaves her fate oddly unexamined.) The stresses of the current economy is touched on briefly (“The only thing distressed is you,” says Channing-Mike to a flustered female bank teller who won’t give him a loan), but Soderbergh is mostly generally happy to just get playful with his direction to show us how shabby-glam the whole scene is: low shots of the stripping stage put us in the thrill pit alongside hen-party hecklers; skewed-angle or close-up shots in flaring reds and blues make intoxicatingly abstract imagery of faces and bodies. There’s fun to be had with these people, especially Tatum’s Mike and McConaughey’s Dallas, and there’s one shot which visualises with icky daftness the very notion of the term ‘pig sick’.

Also, check out my Magic Mike-related article on 'male strippers in the movies' in the latest issue of Attitude Magazine.
Posted by Craig Bloomfield at 21:01