This week my "Take Three" column (every Sunday, three write-ups on three performances in a supporting/character actor's career) over at The Film Experience features Eva Mendes in Live!, Hitch and Last Night. 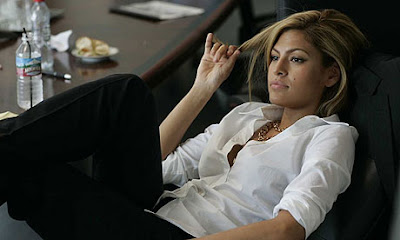 Take One: Live! (2007)
Building on her dramatic work in We Own the Night the same year, Mendes took on another (semi) serious role, one deviously tinged with delicious black comedy, as TV executive Katy in Bill Guttentag’s Reality TV mock-doc Live! Perfectly styled in sharp attire and a coffee ‘to-go’ in hand, Mendes' Katy is ambitious, ruthless and most likely hollow on the inside. She has grand ideas. One of them kick-starts Live!’s plot: six members of the public will play Russian roulette live on air; the sole survivor is the winner...
Read the rest here

Posted by Craig Bloomfield at 17:08