More than her ‘odd jutting chin’ it’s the jarring accent which is the dominant aspect of Knightley’s performance that knocks you out of whack. And time and place. Kudos for giving it a bash, Keira, but it needed a dash more refinement and a vat less fake-Russian guttural burp. However, for committed, contorted limb despair you're top of your game.

Viggo’s accent, on the other hand, is smoother on the ears. But if you swapped Viggo’s faux nose in this and Kidman’s pointed proboscis in The Hours I don’t think many people would be able to tell the difference.

Early scenes give Knightley a lot of rope to tie herself in knots with. She excitedly frays them in a curious yet irritating manner. (At least in the early scenes; her performance finds a baseline halfway through and she convinces with a great deal more subtlety thereafter). 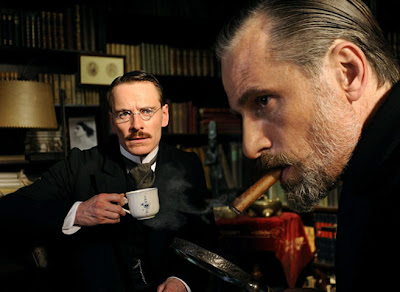 The evocation of the various interior spaces – the rooms, hallways and modes of transport that Jung, Freud and Spielrein occupied* – created by Peter Suschitzky’s cinematography was a chief joy. The environments are dense with an enclosing fug and embody the idea of people being hemmed in by imagined (or unseen) ill acts. The blend of muddy hues of greys, browns and greens suggests untreated bruising. *As in much Cronenberg’s work, the characters interact largely within interior environments.

“Never repress anything,” seems to be the overriding statement that A Dangerous Method makes. This one brief line from Cassel, who is essentially the film’s own id, its nudge-wink lascivious prompt, sums up the connection the film makes between the mind, the body and the way Cronenberg makes serious work of expressing it.

The cuts between scenes are often abrupt - albeit in an airy fashion – and smoothly woven together; they arrive oh-so-quietly and make time appear endlessly, bafflingly, fluid (even if the conversation of a given scene hasn’t been entirely resolved, suggesting an everlasting dialogue/narrative).

One particular shot from Fassbender’s boat slowly gliding toward Knightley waiting on a set of lakeside steps (the POV his, as the camera floats closer to Knightley), and then a leap to a mid shot of her looking pensive, is elegant in a subdued way. The following shot (a high angle looking down on both their characters as they sleep, entwined on their sides, in his boat) extends the pair’s connectedness. The moment is all the more compelling and affecting for being conveyed without words. Just a delicate piece by composer Howard Shore accompanies the moment. 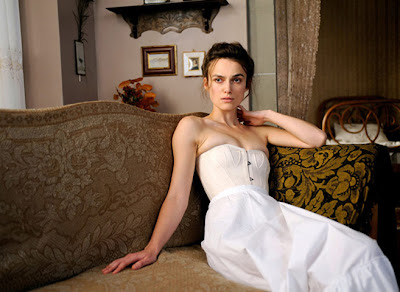 For all of Cassel’s character’s (Otto Gross) sexual braggadocio the maid with half a boob out that he bonks against a ladder looks incredibly bored.

The verbal exchanges, mostly between Freud and Jung, are more often than not dry as old parchment. Did they never argue over their ideas? (No fiery debates on your subjects, lads?) For a film concerned with the loaded intensity of words, the passion of conversation is largely missing. (Surely F&J would’ve talked ceaselessly over one another, verbally tussled with wordy one-upmanship?)

The liberal arrangement of intricately placed objects (Jung’s equipment, Jung’s household tea things, statuettes/ornaments etc) was a cause for much fascination when the dialogue wasn’t.

Would a more formal experimentation have given the film more life and lift? Would a Tabu-style play with dialogue/silence, say, have made for some kind of gloriously odd yet invigorating disconnect between its ideas and visuals? What if it were completely relayed solely in v/o narration – with no two-way conversations whatsoever? (The issue of telling a story about two of the world’s foremost talkers/thinkers without them uttering a single word to one another might have made for a curiously, tantalisingly antagonistic experience.) Or, what about a three-way role switch, where Viggo, Fassbender and Knightley all alternately shared their respective parts? 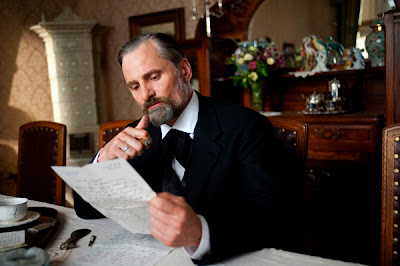 The sex and/or spanking scenes between Fassbender and Knightley are shot via mirrors fixed on wardrobe doors. I think there might be a deeper psychological reason for this - though it's one that's slippery and hard-to-fathom. Vanity, reflection, ego, the male gaze... sex as surface desire that cloaks hidden meaning. Although, it could just be the kinky thrill of voyeuristic hanky-panky.

If there’s ever to be a remake of Daughters of Darkness on the cards, Sarah Gadon would make a fantastic Elizabeth Báthory.

The late scene with Knightley and Fassbender (where he stares out over the water as he recounts to her his apocalyptic dream) contains some of Fassbender’s most poignant and open-hearted acting yet. His crestfallen demeanour and wondrously resigned expressiveness was the single most astonishing thing about A Dangerous Method. More than his queasy seduction in Fish Tank and continual unquenchable forlornness in Shame, this moment stands as matchless MF…

… and his last line in this scene, expressed to a now-lost-to-him Spielrein, “My love for you was the most important thing in my life… sometimes you have to do something unforgiveable just to be able to go on living,” is delivered with impeccable emotional gravity. The clever sod nails unbearable heartbreak in one.

The film begins to run a rake over your heart just as it’s about the end.
Posted by Craig Bloomfield at 21:54