I Want a Refund on the Rent 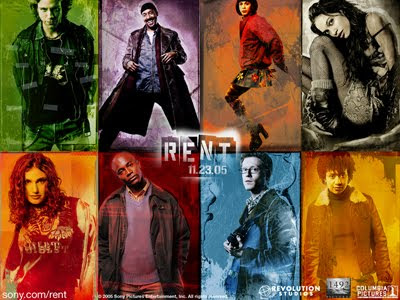 There was a point about twenty minutes into Rent (Chris Columbus/2005) when I wondered if the cast weren’t actually singing with woe and despair about the unfortunate fact that 50% of them had AIDS, or that 100% of them had overdue rent payments, but more for the fact that they were upset that someone forgot to hire a cinematographer.

The film's tone is intentionally bleak, and the characters' lives are in turmoil (and, yes, their electricity was cut off), but you’d think that for the big screen outing of a much-loved musical they would want the audience to actually see the song and dance routine that all concerned made out of their irritating, precocious lives. A zip back to the credits to find Stephen Goldblatt’s name as director of photography made me wonder if he had cataracts. 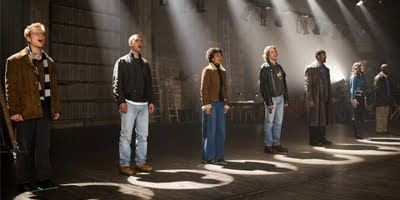 Apart from the dimly lit drama on show the film was a dated, annoying mess. It’s set in 1989, so it's time period is indeed intentionally dated, but why needlessly enhance the point by having everyone sport ripped, faded denim and hair straight out of an A Chorus Line rejects list. There was one guy who I swear would’ve looked more at home filming an early Bon Jovi video rather than singing about how awful his lot is from a fire escape (the song he sings even includes the words 'blaze of glory'). It's often inaccurate with its timeline, too: early on there’s a song reference to Thelma & Louise, but that film wasn’t released until 1991.

Rent, as a movie, only really came about because people went film musical crazy over Chicago, so Home Alone director Chris Columbus thought he’d have a crack at Broadway on the big screen. It’s a fusing of that Oscar-winning film and an attempt at retreading what Angels in America did in its HBO form; Chicago was partially innocuous but had several moments of sparkling verve; and Angels went deeper than the few heart-tugging scenes of self-reflection on display here. 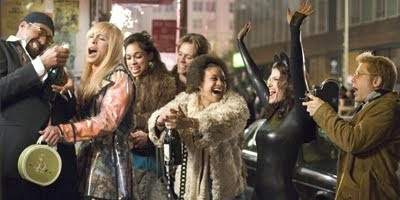 The songs - some of which feel too contemporary for its time period, others wouldn’t be out of place on MTV circa 1984 - create confusion. The music soundtrack and the sound design collide in a disorientating manner and don’t often appear to successfully sync with one another either; the hisses and clunks of the New York Subway badly jar with the kid’s singing voices on board.

The songs actually reminded me, above all else, of the kind of thing that appeared on Sesame Street (could Rent have been the inspiration for Avenue Q?). I kept hoping that Oscar the Grouch would pop out of his trash can for a grumpy put-down or two. (Cookie Monster singing about his sexually-contracted diseases and the difficulty he has affording copious amounts of cookies, whilst trying out for dance auditions every night, might have been something worth seeing!) But then of course Team America: World Police came along in the same year to add a puppetry piss-take on the film. 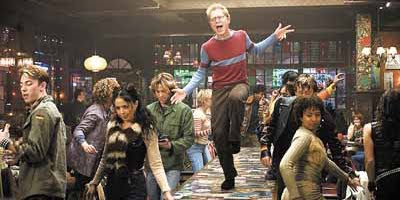 The characters are too bland to hold the attention for the duration of the film; there’s little personality beyond their problems. One character, Maureen (Idina Menzel), is touted as a real blast to be around by the other characters, but when she enters the film she just falls into the same charmless trap as the others. I thought she might bring some zest to proceedings, but all did was irritatingly act out a pretentious performance art skit, in perhaps the film's most cringworthy moment. (Anyone who’s seen Christopher Guest’s daft satire of the indie film community, The Big Picture, will remember how Jennifer Jason Leigh’s cameo as a video artist hilariously mocked filmed performance art.)

Rent just felt like a big, fuzzy group hug, only with people singing high-pitched nothings in your ear. I haven't seen the stage musical on which the film is based - and maybe I should, as it might explain a few things - but I'll take a bet that it isn't half as tedious or as ingratiating as this mess. It’s just St. Elmo’s Fire with more tissues and issues.
Posted by Craig Bloomfield at 00:20