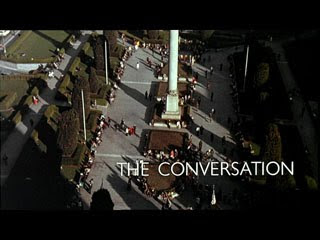 The Conversation is pretty much my favourite Coppola film. A small part of the reason for this is the incredible way it begins: a fade, from black, on to busy Union Square, San Francisco, California. Simple uppercase opening titles (in Gill Sans) unassumingly come and go. A barely perceptible jazz score plays (on the soundtrack? In the square?) as people (shoppers, businessmen, tramps, pedestrians, passers-by, anyone, everyone), like dots gradually getting bigger as the camera slowly and ominously zooms in, weave their way through their shadows and past one other. The jazzy music increases in volume and is intermittently interrupted by electronic voices muffled and distorted by feedback or interference. The camera picks out a mime in the crowd to observe more intently; he mimics Harry Caul (Gene Hackman), the film's watcher and listener, drinking coffee; Caul walks off, often looking back over his shoulder... 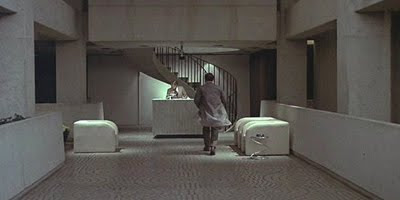 Something's wrong, slightly amiss. But whether or not Caul has good reason to look over his shoulder is answered, perhaps, over the remainder of Coppola's excellent film. Is it a surveilance camera watching the scene below, or Coppola announcing from the off his exact, unsettling tone for the film? Well, indeed it's both. Or is it? Stay closely with it - eyes and ears on full alert. 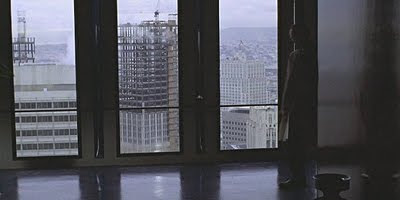 The film follows a structured set of visual squares (as suggested in this title sequence). Restricting, destabilising lines - window frames, the contours of office walls, structural partitions, concrete blocks - trail off both vertically and horizontally, breaking up the film frame. This creates a sense of not only isolation, but also of being constantly surrounded: human figures appear boxed in, multiplied, looking like ants under close scrutiny. 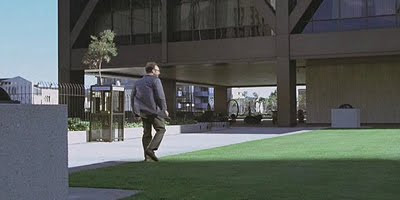 The design of the film is clean, and more importantly, acutely subtle (much like the film’s rightly celebrated sound design - courtesy of the great Walter Murch), and its atmosphere is muted and discordant, as if entirely composed of (aural and visual) white noise. It's drained of colour almost; every scene is lit and framed in such a flat and near-monochromatic manner that the overflowing blood, when it appears in the toilet late in the film, is all the more shocking for its abrupt inclusion - it acts as a signifier of danger, or perhaps of dirt, within the otherwise hermetic surroundings. 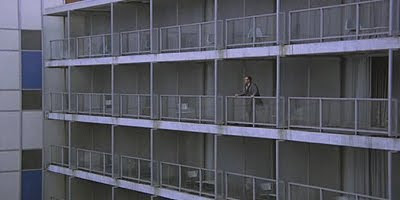 It's a disquieting and compulsive film. This opening shot is tantalising and intriguing, and signals Coppola’s genius for framing disquieting images which retain their vivid intensity throughout every scene - from first to last. It also sets the tone for the film perfectly. It's all about the watching and listening.
Posted by Craig Bloomfield at 18:45