(Belated) At the Cinema: Inception 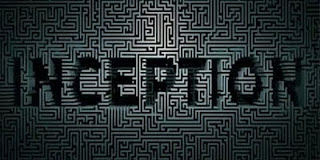 I've been slow on this one: unfashionably late to the Inception table. Although perhaps not too tardy: I foresee folk reviewing, re-reviewing and then re-reviewing the re-reviews well into the new year - it's had that kind of effect. One of the reasons I didn't bother to add my tuppence-worth, my drop in the Inception commentary ocean, was because I got rather sick of hearing about it. When you stumble upon a fifth over-excitable interpretation of what the spinning top really represents in the course of a day, I think even director Christopher Nolan himself would want to switch off. But it was to be expected. Nolan's on a golden run - he's a much-fervoured fanboy favourite - and little will slacken the mass excitement of a new film from him. And outside of the more hardcore devotees' obsessive ruminations, I'm genuinely enthused that there have been several films recently (this, Toy Story 3, Scott Pilgrim vs the World, etc) that have garnered a great amount of fevered eagerness from both critics and audiences. When you avoid all the hyperbole and resulting backlash (and - groan - backlash to the backlash) and revel in the high anticipation of a new release, it's indicative of the joy and surprise inherent in cinema-going. But in saying all this, Inception didn't bowl me over quite like I thought it might. It was an enjoyable ride, but not perhaps the world beater it's been touted as. 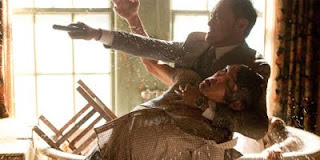 As all and sundry know by now, Leonardo DiCaprio plays an ideas man, literally: Dom Cobb and his dream team (count me as the 1001st person to use that little nugget in a review) are hired by a corporate bigwig (Ken Watanabe) to plant an allusive but persuasive idea into the dreaming mind of his business rival's son (Cillian Murphy) in the hope that it will eventually upend said rival's powerful business hold and send soaring Watanabe's stock. Or something. (The narrative's main thrust gets a little lost amid the layers upon layers of dream-state espionage undertaken by DiCaprio and crew. It gets tricky, but Nolan's editor Lee Smith works overtime, assisting in grasping the plot's particular ins and outs. I didn't drift far off course.) Plus, Cobb has his own dream demons to contend with - in the form of his mysterious wife Mal (Marion Cotillard), who materialises - often in tears, but still looking stunning - due to some possible past bad deed on his part. 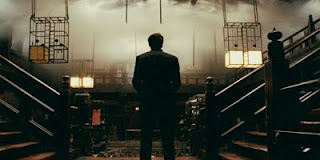 Everything about Inception is expertly mapped out and immaculately designed. It looks visually stunning; it's appropriately classy, very 'high end'. Everyone is impossibly good looking; the clothes and hair are expertly slick. It oozes style. But for a story which takes place in a multitude of intricately-constructed environments - crumbling cities, snowy mountain-tops, opulent hotel rooms, rain-drenched streets - the overall visual treatment is, paradoxically, two-dimensional: fashionable, but flat. Whether this is to do with the hazy impenetrability of the imagined dream projections of whichever character's subconscious we're traipsing through, or simply a way for Nolan to express finesse on an enormous budget, it's hard to say. But the world's created are largely uninvolving. The scene where an entire street rises up and folds over itself, spectacular as it looked, suggested a page of a glossy magazine being turned over: set design as expanded sci-fi fashion supplement; dream plains suggested by Philip K. Dick, styling by Gucci. 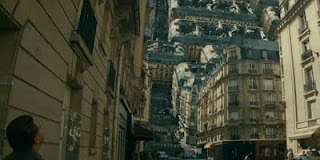 I wouldn't ordinarily moan about too much style overload in current cinema, especially when there's often not enough in big summer movies - and it didn't occur to me to single out for scrutiny the often ostentatious visuals in films such as I Am Love, Shutter Island or A Single Man for their abundance of arty splendour - but it feels like the streamlined visual slickness, though embedded with plenty of clever ideas, was the utmost thing Nolan brought to the table. He knows how his film should look, and he adds plenty of pertinent details that may very well mean something to someone somewhere (names like Ariadne, Page's character, referencing Greek mythology, 'Mal' being a French negative for bad/evil, etc)). But he mistakes stylistic posing for emotional depth: when the whole film's about entering, then probing, the farthest recesses of people's minds some exploration of profundity is surely required, however lightly integrated it is - DiCaprio and Cottilard's elegant, surface-entry suffering doesn't entirely provide it. 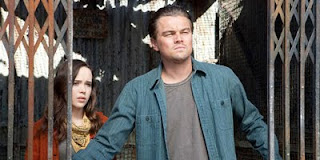 DiCaprio carries the film with less heaviness than he did his similar-ish role in Shutter Island earlier in the year, but he's also duller to watch here, relying on too much furrowed-brow performing for my tastes. His core incepting team - Ellen Page (miscast as a genius dream architect who doesn't get to do much dream architecting, save for folding a mirrored underpass in two), Tom Hardy (funny, and the only actor showing personality, as a face-shifting weapons enthusiast), Joseph Gordon Levitt (who does a lot of lone acting whilst weightless - very good, if humourless, he is too) - all get second dibs on the best scenes; Cotillard occasionally pops up like a Bond Girl-gone-bad to well and truly mess up DiCaprio's sleepytime; but Pete Postlethwaite, Michael Caine, Dileep Rao and Lukas Haas barely get a look in. And however nice it is to see Tom Berenger - an old, largely-forgotten actor not resurrected by Tarantino for once - he wasn't given a great deal to do. 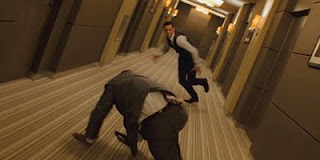 I guess I was expecting something a bit more explorative from a film which feels evidently set up as the very touchstone of integral complex exploration. There has to be the discovery of something more substantial than the repetition of further unanswered questions come the end, right? I wasn't expecting to be hit over the head with obvious conclusions and the simplistic tying up of plot knots (I require far from straightforward explication from a summer film that rests its case on being intelligently different), but as intermittently exciting as it often was, the "ooh and ahh" final build and resulting denouement of Nolan's ambiguous style puzzle barely justifies its means. And whatever it means becomes more and more lost, wrapped up in the enigmatic folds of Nolan's lithe yet characterless vision itself. 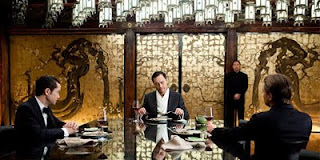 Inception prides itself on displaying its grey brain cells but it's rarely witty or sustainably engrossing over many of its long stretches. I perhaps wouldn't have been as unimpressed had I not seen many other - more concise, less self-important - films (directly about dreams or no: alternate worlds, game worlds, future and past worlds, movie-movie worlds) that have essentially aroused the same ideas, in some cases with a bit more fun, grit and exertion. There's more than a sniff of David Cronenberg's eXistenZ (yes games, but still), and a whiff of 1984's sci-fi adventure Dreamscape. Kathryn Bigelow skirted with dream-dealers in her 1995 film Strange Days (which had better "sleeper" agents in its crew, too, with a frazzled Ralph Fiennes and a kick-ass Angela Bassett in the mix); and of course staunch Matrix fans will see Inception as follow-on fuel. In some ways it's even oddly similar to the daft J-Lo movie The Cell, which at least prided itself on being all style and nothing else. But I guess we'll sit happy knowing that it's Nolan's latest all-encompassing opus, and his film will surpass all those on sheer evocation of high-end imagery and stored credit alone. Still, that gravity-defying hotel sequence was awe-inspiring - Nolan certainly knows how to draw us in with the odd extraordinary and perplexing image now and again.
Posted by Craig Bloomfield at 11:21