Fade in on a fast POV view of a road at night. Car headlights illuminate the centre lines dividing the two sides of the road - a sly indication, perhaps, of the two distinct (but ultimately intertwined) narrative segments of Lost Highway, and the doubling theme employed - as ever -by David Lynch for his "21st Century horror noir".

The opening titles zoom at the screen in block yellow stencil type. David Bowie's 'I'm Deranged' cuts in: he sings, "Funny how secrets travel." We know Lynch loves his secrets. And of course he loves the open road - as long as it leads us somewhere dark and dreamy, and never, ever comes to an end.

Lost Highway constantly splits off down warped avenues, to only then converge back to the staring point - though seen from different perspectives a second, third or fourth time. And then seemingly plays again and again - down the same road, but with infinite possibilities for careering off in further new directions.

We see just how secrets have traveled come the end of the film. Time has looped around, veered left and right (but never straight down the middle), and then doubled back on itself several times over. The opening titles become the closing credits: a visual repeat, but with significant and baffling alterations. Lynch's spectacular mindfuck brings back Bowie's song (more ethereal this time) to usher the film into desperate head-morphing oblivion. Lost Highway will always fascinate me - and its titles will always give me a thrilling jolt each time I watch them.

This is the last Tuesday Title for a while. But it is... 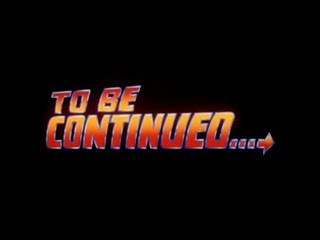 Posted by Craig Bloomfield at 21:46