At the Cinema: Hereafter

Clint’s new one, Hereafter, a human drama with a supernatural leaning, is out to prove that, yes, he can make a worse film than Gran Torino. It's uninspired filmmaking: lazy, largely pointless and ultimately lacking in any clear meaning. But mostly it's no fun at all. There’s an air of pallid stagnancy to every scene: each one appears dragged together in mournful fashion – one after another they clunk into a simplistic, rotational narrative which is certainly followable, but never satisfying. Three plot strands set, respectively, in the US, France and the UK see Matt Damon as a reluctant psychic, Cécile De France as a Tsunami survivor/TV host and a combination of Frankie and George McLaren as a boy grieving his newly-deceased twin deal with afterlife experiences in differing ways. We get shunted from one country to the next in tedious rotation; we get scene after scene of these dour people in dire need, moping around wondering what lies beyond the final curtain. Some scenes go on so long, and without much rhyme or reason that I suspected ol’ Clint had fallen asleep in his director’s chair: when Damon joins a cooking class we get lengthy digressions of him preparing food, which in each instance simply consists of slicing tomatoes with Bryce Dallas Howard; De France’s scenes at her workplace are merely padding and lead, by and large, to loose ends. And anyway, it turns out that these scenes are ultimately superfluous to the emotive thread Eastwood and scriptwriter Peter Morgan (The Queen, Frost/Nixon) have cooked up. Much running time is allotted to totting up characters’ histories, their reasoning for their actions, but the key element - that of any rich characterisation - is largely absent. 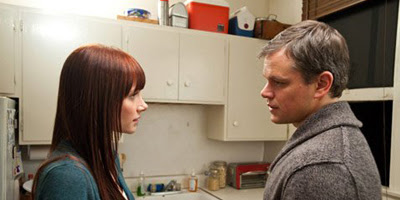 There’s surely no doubt that Clint had access to a sizeable budget, assistance from some top-tier Movieland friends (Morgan, exec. producer Steven Spielberg) and a crew more than willing to work with a certified cinema legend – and that all this has seen his film receive wide release and prolific coverage, of course. But does this ensure the end product is unquestionably interesting? Do we pay it attention based on his list of prior, obviously considerable, credentials alone? Is it worthwhile becaise it's Clint? I know some people are willing to blindly accept on good faith anything new from a long-proven, highly-regarded name, but should we simply shrug and let Clint indulge in an old man’s cinematic folly because of his advancing age? In short: no to all the above. Some filmmakers simply get worse in their late careers. Eastwood isn’t exempt from inclusion because of his iconic status.

As it is, the acting is fair (Damon) to ropey (the McLarens); its unceasingly dour pace is a dull, myopic trudge; its take on all things supernatural is both unoriginal (blurry spectral figures, pallid faces everywhere) and one-sided (all British mediums are hacks; American ones are genuine); and everybody speaks with plaintive reverence as if God is listening and cared what they all had to say. The crass appropriation of real-life events (the 2004 Indian Ocean tsunami and the 7/7 London bombings of 2005 – seemingly faddishly included and come with a topically shock factor) into the narrative has very little actual impact on the thrust of what Morgan and Eastwood are attempting to say; for all genuine or concrete bearing that those events’ have at the film’s close, it might as well have been a swimming pool accident and a firework mishap that propelled the plot to its inert, slipshod denouement. It doesn't matter what the tragedy is, as long as there is one. And it’s entirely baffling that somewhere along the way Hereafter morphs from a fairly maudlin supernatural flick into a particularly maudlin and misguided meet-cute.
Posted by Craig Bloomfield at 20:12