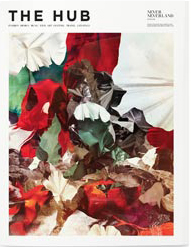 Here is my article on film sound, music and songs that I was asked to contribute to the first issue (Autumn 2010, pp 64-65) of new arts, fashion and culture magazine, The Hub (pictured left). The article was accompanied by two illustrations by London-based artist Ciara Phelan: see them here, at her website. I thought I'd post the article here, as the Hub's website, linked to above, is currently still under construction; outside of buying a printed copy, none of the content is available online.

The brief for the article was to (hopefully) entertain and inform the prospective magazine's broad but primarily art-/fashion-/design-based readership in regard to the three above-mentioned acoustical aspects of filmmaking. The article is reproduced below as it appears in the magazine and the films' years of production in parenthesis were required by the editors. For the Hub's second issue - themed by the idea of Renaissance - I have written about female film directors. It should be on sale over the next few weeks.

Imagine if you will Psycho’s (1960) shower scene without the accompaniment of its screeching strings. Imagine Saturday Night Fever (1978) sans the soulful Bee Gees strut. Imagine a silent Star Wars (1977): what would we have done as excitable kids without the opportunity to badly mimic the whooshing-clashing sound of a lightsaber fight? Playtime would've been duller than the Darkside without Darth Vader.

As consumers of the billion-dollar industry that is cinema, we often wax lyrical about our excitement in seeing the latest films, but, interestingly, less so about hearing them. Film is primarily a visual medium of course, though inherently collaborative: each craftsperson or artist - director, cinematographer, editor - contributes their slice of cinematic vision to uniformly converge on our movie screens for optimum effect. But integral to its impact are its aural particulars: the audio aspect. So, what of our relationship to the songs, scores and sound design in movies?

The more sharp-eared cinemagoer may notice the slightest of sounds - the bead of sweat hitting the alarmed floor in Mission: Impossible (1992), the carrier bag blowing in the wind in American Beauty (2000) - but we surely all love the magic that a perfectly-placed song or resonant score brings to a great film.

The evocation of memorable music in movies is essential to our enjoyment of them. Many film buffs may recall Quentin Tarantino’s homage to Jean-Luc Godard’s Bande à part (1964), in John Travolta and Uma Thurman’s ‘50s-style diner dance-off in Pulp Fiction (1994), before they remember the violent gunplay. With acoustical ease Tarantino followed on from Pulp Fiction by introducing Pam Grier, as drug-trafficking air stewardess Jackie Brown (1997), as she is ushered along an airport conveyor belt to the smooth strains of Bobby Womack’s ‘Across 110th Street’.

Tarantino made a virtue of referencing the music of older cinema, particularly from the early 1960s French New Wave. But so, too, did Bernardo Bertolucci in his 2003 film The Dreamers; where he worked in snippets of Antoine Duhamel’s wonderful score for Godard’s Pierrot le Fou (1965) for maximum nostalgic impact. By sampling many icons of the swinging sixties on the soundtrack - from Jimi Hendrix and Janis Joplin to Edith Piaf and The Doors - Bertolucci successfully transports the viewer back in time to an era of unrivalled experimentation and civil unrest with a range of pertinent musical cues.

The use of songs - old and new, pop hits or instrumental tracks - to strengthen the impact of a scene is (very nearly) as old as cinema itself. From 1927 - and the invention of the “talkie” with The Jazz Singer - onwards, our ears have been treated to a multitude of celluloid audio delights. We need the sorrowful love songs, the comedy musical interludes and the ethereally haunting solos to pepper the soundtracks of our cinematic spectatorship. Perhaps above all other filmmaking components music is paramount in directly arousing our emotions.

Many of cinema’s directorial big-hitters have consistently attuned their ears to the crucial aspects of film sound. Stanley Kubrick memorably mixed the comical with the horrific in A Clockwork Orange (1971) via sped-up Beethoven and a dark nod to Singin’ in the Rain (1952). So evocative is Italian maestro Nino Rota’s ‘Main Title Waltz’ for Francis Ford Coppola’s The Godfather (1972) that, every time I hear it, I have to check the bed for fear of finding a horse’s head nestled between the sheets. Although it was Federico Fellini who of course got on famously with Rota years earlier, using him consistently throughout his career; his delicate string arrangements seductively lead us alongside Anita Ekberg to Rome’s Trevi Fountain in La Dolce Vita (1960). She was showered with water while we bathed in audio splendour.

Much of the intensity in Steven Spielberg’s films arrives via cleverly-orchestrated sound, or lack thereof: Saving Private Ryan's (1999) gut-wrenching opening Omaha assault relied as much on the sound of bullets piercing helmets as it did the sight of it (in some scenes you could almost hear a (grenade) pin drop.); and the ominous use of silence during many of Schindler's List‘s (1994) harrowing scenes tactfully imbued the film with a dreadful tension. Not to mention the pounding, water-rippling sound of an approaching T-Rex in Jurassic Park (1993), and the tonal five-note motif used by the aliens to introduce themselves in Close Encounters of the Third Kind (1977).

It’s worth listening out for the ways in which filmmakers are able to twist your ear to a good tune and alert your senses to subtle uses of sound - whether it’s a song you’ve never heard before or a long-time favourite played anew. Songs, scores and sound - in tandem with rich, memorable visuals, and harnessed by a musically-savvy director - can harmoniously work together to create the very best cinematic experiences
When we’re watching a film we know it’s essential to keep our eyes peeled for visual wonders, but it’s also equally worth keeping our ears pricked for the aural pleasures. You don’t want to miss a trick or, indeed, a track.
Posted by Craig Bloomfield at 22:49