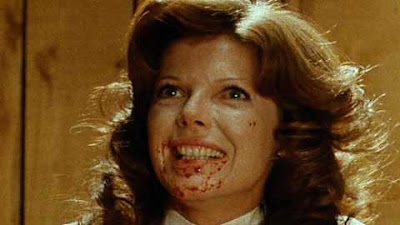 Samantha Eggar in The Brood
Eggar won the Best Actress award at Cannes for The Collector in 1965 (and also snagged an Oscar nomination and a Golden Globe for it in 1966). She also starred in The Uncanny (1977), The Exterminator (1980), Curtains (1983), The Phantom (1996) and The Astronaut's Wife (1999) among many others. But my favourite role was as the fantastically named Nola Carveth in David Cronenberg's 1979 masterpiece The Brood. Never has the term 'mother knows best' seemed so gruesomely and disturbingly wrong. Nola was a portrait of hysterically warped and brilliantly bonkers motherly mania. Eggar gamely threw herself into the middle of its sci-fi/horror worldand delivered her performance with clear, delectable relish. She could knock your socks off without even having to get out of bed...

"I seem to be a very special person now. I'm in the middle of a strange adventure." And how, Nola.

Trailer for The Brood:

Posted by Craig Bloomfield at 09:22