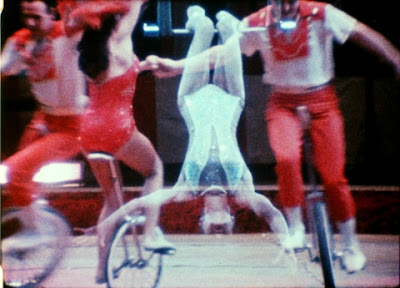 I like my circuses fast, heady and full of colour. It’s how they should be. The experience should be exciting. It should draw you us and spit us out exhausted and full of bold and bizarre images. This is, by filmic proxy, exactly what Jonas Mekas’ personal, ambitious and downright groovy three-hour 1969 film essay Notes, Sketches and Diaries (AKA Walden) does. In it there’s a section – Reel 2, or, more precisely, the first 12 mins of Reel 2 (the film is made up of six half-hour “reels”) – called ‘Notes on the Circus’. It comes at us very fast. As film representations of the circus experience go, this one’s a gift. It features some of my favourite movie imagery of the circus outside of the moving scenes of John Merrick in David Lynch's masterful The Elephant Man, Candace Hilligoss wondering dazed and confused around a pier of horrors in Carnival of Souls and Bill Murray and Geena Davis holding up a bank in Quick Change. Ok, so that last one has a rather tenuous circus link – but they are dressed as clowns. 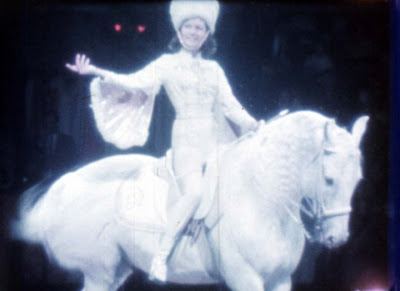 But back to Mekas. In twelve of his super-fast, super-duper, super 16mm minutes (itself split into four numbered sections) there’s enough heart-stopping big top bop to last an entire film’s worth of treasured memories. He fires at us: rapidly running ringleaders, Unicyclists in blue costumes, unicyclists in red costumes, a dog scampering up a ladder, people darting through flaming hoops, trapeze artists swinging frenetically to and fro like sped-up human pendulums, acrobats spinning in quick succession, showgirls, horses, horsey showgirls (maybe even showy horse-girls for that matter - it's all so fast), lions and tigers, tigers riding horses (this bit of organic animal magic is wondrous), towers of people rising up and coming down, elephants circling the tent, and much more. Everyone and everything circles, spins, turns in this assault of the reel. It all comes at us in an abstracted, sequined swill of animals and bodies, pizzazz and performance. And in full-on flickering colour. It’s a carnivalesque art film segment containing all the glitter and uplift of a day and night at the circus for real. And all whilst music that sounds like a Bob Dylan protest song being played by a drunken clown on a mouth organ artfully attacks our ear sockets. Ah Jonas, you make me skip away from a screening with keen wonder. You should direct every circus-related film. You should direct every circus. I'd be there super fast.
Posted by Craig Bloomfield at 19:22