Frederick Wiseman is as much a film artist as any fiction filmmaker. He's often quite rightly held up as such alongside many a fellow documentarian (Errol Morris, the Maysles bros for instance), especially for his no talking heads, no descriptive onscreen captions and - most pertinently - his judicious approach. As ever, his mastery of the form is present and apparent in his latest, Boxing Gym. The titular business in Austin, Texas is the focus of Wiseman’s measured gaze: its owner, Richard Lord, and various members (including lawyers, students, young mothers, doctors, soldiers) train, chat and generally box happily away whenever their often busy lives permit. All the while Wiseman, with acutely signature visual dexterity, captures key moments and exchanges - which reach far beyond mere commentary on the activity at hand - that reveal insights into the issues facing the gym members in a typically unintrusive, exploratory manner. 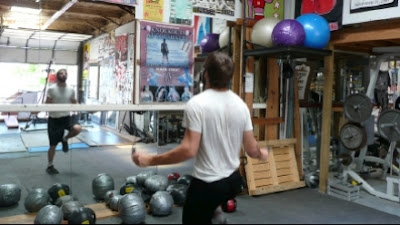 The aural rhythms of the gym are particularly notable for the extraordinary impression they arouse: the sound of rapid punches to speed bags, the constant buzz from the training timer, the white noise of friendly banter in the background and the bustle of lives lived as a series of light, breathy or grunted movements all commingle into an vividly energetic soundtrack. It’s a visually arresting film, too: light falling on the gym floor, frenetic, dance-like close-ups of nimble-footed boxers and still shots of the city in bright daylight all display Wiseman’s skill with crisp, easeful compositions. (It's remarkable, and revealing of his organic immersion in his subject matter, that Wiseman chose two projects in sequence - this and La Danse: The Paris Ballet Opera - that find strong visual form in elegant footwork.) 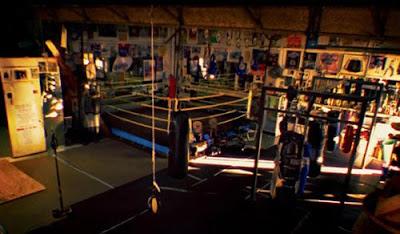 Of course, the telling snapshots of individual gym members resonate most, right from the start. I was immediately interested in each person’s lives, the fleeting ins and outs of their daily grind, within and away from the gym, and the collective effect all the members made on me in rotation. It's a portrait of defence and exercise within the confines of a specific microcosm and it paints a vibrant picture. These are all fascinating individuals. As ever with Wiseman, I could’ve happily spent many more hours with them. One image, briefly included late in the film, stands out: a boxer practising in the gym car park near a huge tree looming over him, swaying in the breeze; man and nature, the grand and the everyday, captured together, with zero fuss.

Boxing Gym and La Danse: The Paris Ballet Opera both featured in my Top Ten Films of 2010.
Posted by Craig Bloomfield at 21:20