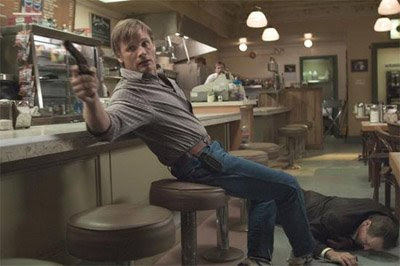 I never thought I’d see a David Cronenberg film that didn’t feel like a David Cronenberg film. At least on the surface anyway. Look a little deeper and A History of Violence is Cronenberg through and through. Everything is initially presented as straightforward, and not the least bit abstract: there are no gristly fish guns, penile-enhanced armpits or a talking assholes in sight. From the outset it seems as if he’s sidelined his core concerns, put them away for another day and decided to give us something simpler and, perhaps, family-orientated for a change. The emphasis is certainly on family, but it's not like Cronenberg has pulled a fast one and remodelled The Waltons as a bunch of revenge-hungry vigilantes. Although, strangely, that's not exactly a million miles from what we have here. The title, though, says it all, and despite first impressions it is certainly written in Cronenberg's signature.

Tom Stall (Viggo Mortensen) and his wife Edie (Maria Bello) live in the homely town of Millbrook, Indiana with their son Jack (Ashton Holmes) and daughter Sarah (Heidi Hayes). Tom runs a small diner, which is typically, and actually far too strangely, average. It could have come straight out of Norman Rockwell’s or Frank Capra’s imaginations. It’s a setting familiar from a countless number of rural smalltown folk-populated films that could have been made during any given year since the America of the post-war '50s idealised such places as a shorthand depiction of everyday normality. Some of A History of Violence's earlier scenes (bar, of course, its abrupt opening massacre) do superficially resemble those one-page ads from 1950s Good Living magazines.

Two gangsters - fresh from the opening shoot-out - come to Tom's diner one slow Saturday night and for reasons unknown threaten everybody inside, waving guns around like tokens of authority, seemingly intent on some random stick-up. In a quick act of intuitive (or is it?) heroism, Tom bests the thugs and kills them quickly and efficiently. It’s an apparently out-of-character act for such a well-respected and work-a-day type guy; and thus the ensuing media frenzy posits him as hero and saviour of the community. Only that this new-found public adoration, and the widespread TV attention that comes with it, brings the possibility of more gangsters, of further violence. Things have already got very icky, but it’s peanuts compared to what is on its way (in the form of Ed Harris). And it’s not so random the next time. 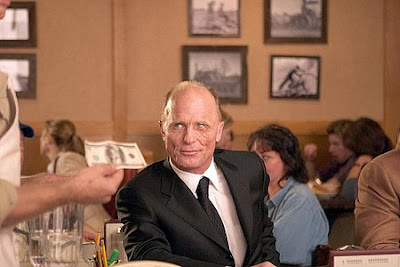 In a sub-plot Jack overcomes his meek nature and retaliates against his high school tormentors. The central narrative with Tom is counterbalanced with Jack‘s experiences. This goes to suggest that the capacity for violence is maybe something that can be inherited and passed down the family line. But the film never tells us this explicitly; it leaves the question open-ended. Jack could simply be imitating the family atmosphere, and lashing out because dad has "shown him the way", or it could be that the focus on their relationship, which is almost given as much weight and emphasis as that of Tom and Edie’s, or Tom’s and the gangster’s, has more serious thematic repercussions. Without these father-and-son scenes the film would lose a bit of its essential driving force; the quiet juxtaposing of the dual narrative concerns speaks volumes, albeit softly.

The film is less a commercial move onto safer ground and more a subversion of pre-established action and western genre conventions. It’s a slyly subtle subversion, but an incredibly effective one. Many saw A History of Violence as Cronenberg going mainstream. But it only reads as such when synopsised or take on face value: the meat here is firmly embedded under the flesh. With the first and second scenes of violent death, Cronenberg is proposing we take issue with the murder of a child by ruthless killers, only to see if we feel the same when the killers themselves receive their comeuppance. We are put in a position where ideas of violent disgust or satiation are combined, opposed and questioned. The key to this is in how Cronenberg manipulates these scenes through suggestive direction. The camerawork is so concisely assured and balanced throughout so as to create a deep internal dichotomy that is hard to immediately fathom, but worth the overall investment.

It’s like someone finally decided to make a film to question, or perhaps even to piss off, all those dusty old western buffs that herald an outdated film like The Searchers (1956) as a masterpiece. Long live the new breed, Cronenberg seems to suggest. The John Wayne classic is not the only film that Violence reconfigures either. The competition comes bang up to date too: it wipes the floor with Sin City (2004). For films based on acclaimed graphic novels, that use aggressive ideas with the very nature of violent acts as both a springboard for gunplay and a way of life, Violence gives us, in a deceptively simple way, a grounded sophistication and depth that Sin City, with all its false plot twist-and-turn complexity, never even had to begin with. Of course they are both very different exercises in the exploration of violent cinematic themes, but they essentially say the same - or at the very least similar – things. The difference being that Cronenberg’s film has an abundance of style and uses it to integrally push its ideas forward, to reach a fully-rounded and emotionally draining conclusion. Whereas Rodriguez and Miller’s film is all hollow trend-driven trickery that ultimately says nothing at all. Both films took up a fair share of column inches both online and in print, on their respective releases, in regards to how they treat violence, but time will tell us which one has lasting strength. 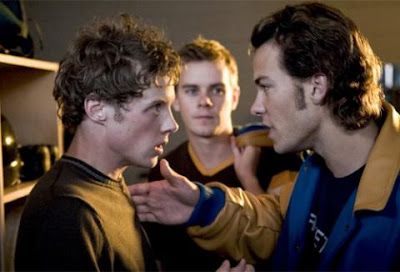 I like the fact that Cronenberg has tried something slightly different in his approach. It’s obviously not the first time he’s adapted someone else’s material (in fact he does this a great deal; 8 out of his last 10 films have been adapted from pre-existing material). But it’s perhaps the first time where his adaptation hasn’t outwardly resembled what we’ve come to expect as a typical Cronenberg. It’s what he finds deep down, at the core level, then dredges up to the surface that makes all the difference here.

With his adaptations there is always a clear and integral distinction between source material and film. Naked Lunch (1991) felt very little like Burroughs’ novel and was more accessible and interesting for it; with Crash (1996), the kinky absurdities of Ballard’s book were distilled into simple, intentionally savourless scenarios that brought out the story’s damning points in visually interesting ways. Whether he is adding, or indeed adding by actually taking away, he ploughs his own path through the use of others’ original texts. With A History of Violence he is doing the same, but it just seems out of character at first glance.

Anyway, is he supposed to repeat himself in an obvious manner from film to film? If he explored exactly the same themes verbatim in all his films wouldn’t that be sadly typical? It’s like when David Lynch (not that I’m comparing ‘the Daves’ outright, as they really do have very little in common) made The Straight Story (1999), his ideas there were different enough to appear as a new path for him, but still linked with his staple concerns to warrant the use of his established stylistic gestures (it was still very much a Lynch film, despite it not “looking at the seedy underbelly of Everytown”). The same goes for a filmmaker like Gus Van Sant. Gerry (2002), and by extention the three other films in his unofficial ‘death trilogy’, Elephant (2003), Last Days (2005) and Paranoid Park (2007), were departures in one respect but they all still distinctly felt personal, like the Van Sant of old, in that no-one else could’ve possibly made them. In comparison to these other contemporary filmmakers, Cronenberg is doing what he does best: giving us something questionable, debatable and refreshing. The result is astounding. 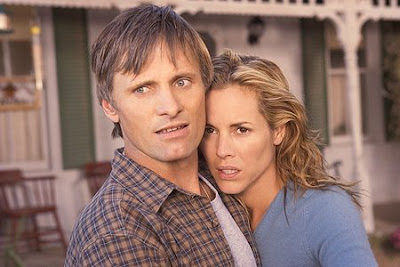 The acting by all is complex and understated (with the exception of William Hurt – in a funny, but terrifying cameo toward the end of the film). Viggo Mortensen plays Tom with a reserved and intense conviction; you have to study his face hard to see that underneath the gruff façade an altogether different man could be lurking. Maria Bello’s role is crucial to the overall themes of the film, and she gets every scene totally right; there’s a simple and devastating undercurrent to her performance; the occasionally straightforward ‘wife’ role hasn’t seemed more integral or as connotative as it is here (she should’ve won every supporting award going).

Backing up its title, the film indeed places violence front and centre. It asks us to question whether we are really truly safe in any real way. If something like this could happen to a guy like Tom, then it could happen to any of us. Tom’s position is that of the ‘everyman’; it is given as both straightforwardly simple and with a hint and a wink of ironic suggestion. The stylised and almost hyperreal rendering of the “normal” family scenes isn’t simply there to make the acts of violence (the many gun deaths) stand out as oddly realistic (although they do), they are there to nudge us in the ribs and make us pay attention; surely we can’t assume that the whimsical overindulgence in homespun wisdom and the stereotypically-rendered family life is to be taken on face value? It’s broadly laid out, very much there for a reason, and open to interpretation. A History of Violence deserves any, and every, kind of positive attention thrust its way.