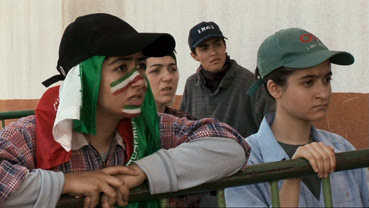 Offside (2006), Jafar Panahi’s most recent film about a group of Iranian girls' attempts to gain entry to a crucial football match (2005’s World Cup qualifying game between Iran and Bahrain; Panahi actually filmed on the day of the match) was one of the most joyous and affecting films of 2006. It is often very funny, but the darker implications of Panahi and Shadmehr Rastin’s loose, partially improvised script permeate the edges of the comedic action. In Iran women are forbidden to enter football stadiums; if found they face arrest or possibly worse, so they resort to dressing as men to evade detection.

The first girl (Sima Mobarak-Shahi) that the film chiefly follows – from a nerve-wracking minibus ride to eventual capture by guards at the stadium gates – is only one of a handful of girls who have all been detained in a specially constructed holding pen just behind Iran’s Azadi stadium under the watchful eyes of several soldiers, who are present by stint of duty; they would all rather be watching the game themselves or be away from the army entirely, tending cattle back home. Panahi spends almost as much time listening in on the soldiers’ stories as he does the girls’ plights.

From the start the viewer is dropped straight into the expectant bustling of pre-game fever. The agitated, documentary-like camerawork creates both empathy and identification: because the game is real you feel the excitement of the occasion, and also feel for the girl, not wanting her to get caught. The whole match is just out of her and the other girls’ reach, (and also for the viewer, as we never directly see any of the game; it’s barely glimpsed in background shots). The soldiers – at the girls’ request - commentate it on; beyond duty they obviously sense a shared passion for the reason they are all present. 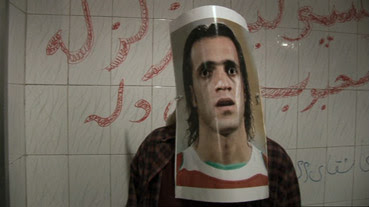 It’s tempting to surmise that the actual game isn’t of narrative importance, that it’s more that the occasion supplies Panahi with a social situation in which to explore themes of significance relating to contemporary Iranian women. But of course the game is important. It’s the focus of everyone’s attention, whether or not they (or we) actually get to see it. The way in which the camera so closely tracks the girls’ desperate attempts to sneak a peek at the action on the pitch creates a consuming but frustrating drama: as the film progresses we more and more want the girls to actually see the match. That’s why they’re there, and what they’ve risked so much for. Through this situation, Panahi manages to tell a story that is both incredibly relevant and sadly real. That he does it through a humorous framework is all the more commendable. The humour needles out the inherent bizarreness and exposes the unfair social restrictions of inequality.

Offside includes footage of the actual game, so its dramatic outcome could’ve gone either way depending on who won. Iran did win (1-0), so it ends on an optimistic note in one respect. Although some specific dialogue in the penultimate scene points at Iran’s wider social troubles – which this beautifully concise, small-scale depiction of female support goes some way to highlight. The final scene shows the streets of Iran as an uproarious flurry of celebratory whoops and hollers: sparklers held aloft by a sea of both male and female football fans pave the way for Panahi’s camera to follow the celebrations into the night.