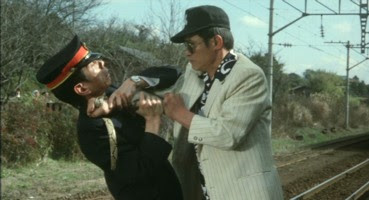 The presentation of Enokizu (Ken Ogata) as simply a man – though a serial killer – is paramount to how potently Vengeance Is Mine (1979) wields its chronological narrative to examine the mechanics of an illusive and impulsive killer’s mind. The film begins with Enokizu’s capture, then jumps back to the beginning to chart the 78-day manhunt to bring him to justice. The pivotal flashback to Enokizu’s childhood, where a Buddhist soldier is humiliating his Christian father, Shizuo (Rentaro Mikuni), in front of him, only to have Enokizu be the one to fight back, could be Vengeance’s most revealing scene; perhaps going some way to explain both the film’s English language title and the germs of Enokizu’s future murderous pursuits. Though nowhere in the film is there anything that suggests he is on a personal mission to kill those that have wronged him (his victims are mostly innocents). It’s just an impulse, a guttural desire to commit murder that drives Enokizu on in his killing spree. The childhood flashback seems to be there to merely show us that Enokizu was rebellious and troubled from an early age.

Some scenes seem intentionally underlit throughout. The lighting subtly spotlights the actors within the film’s frame. The final meeting between Enokizu and Shizuo suggests this directly; reflecting the fact that the literal background mirrors the metaphorical background of the characters – not in any trite way (in, say, that Enokizu has a murky past), but in the way that, at this point, both men have prior grievances and regrets that they are only now semi-acknowledging to one another, albeit in an indecisive and dispiriting manner. Resigned, Shizuo reveals very little, but Enokizu shares his final, most telling thought with spiteful pride (snapping, “I want to kill you,” to Shizuo at the last minute). Ogata stands throughout much of the scene, towering over his father, and thus dominating the frame. This highlights the significance of their last meeting, and concludes their fraught relationship on a sad note. 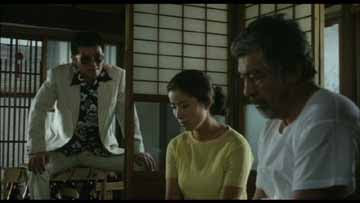 Many of the killings happen off screen. It’s not really about showing how Enokizu kills his victims, or why, but just that he is matter-of-factly doing it. It’s less a psychological portrait than one of simple, curious observation. The killings we do see are given as much screen time as moments of mundane inaction: Enokizu and two women on a ship, watching the dark waves below (him ominously commenting that, “the sea is black”); Enokizu staring blankly out of an inn window as his “girl” Haru (Mayumi Ogawa) is semi-raped in the next room, and so on. The only killing that Imamura’s camera dwells on at any length is Haru’s, emphasising her importance to both Enokizu and her place in the narrative itself; her murder is shown as a painful, desperate struggle for Enokizu. Such moments go far in telling us everything we need to know about him. Imamura displays no moral judgement of his main character whatsoever. This reluctance to judge – matched with the close attention to characterisation – is what makes Vengeance so boldly affecting as a fictional, though factually-based, treatise on murder, one that skirts around the absence of any redemptive conclusion. The restless, almost pragmatic camerawork never lets the narrative pause for too long as it tracks Enokizu through the duration of his murders. We are to keep up pace with him at each stage, even in the multiple, frenetic flashbacks that add a hurriedness to the narrative, but never halts its flow.

The best scenes - though to pick out individual scenes as more significant than others in a film where each one crucially enhances the next so richly; one scene’s immediate predecessor pushes the narrative on intrinsically from the last - are those that feature one character with a respective older opposite: Enokizu with Haru’s mother Hisano (Nijiko Kiyokawa); or Haru with Enokizu’s father. Two particular scenes (one with each pair) reveal key, emotionally relevant details about them. The scene where Enokizu is walking home with Hisano – after the two have had an almost idyllic, and financially successful outing at the boat races – is beautifully filmed and gentle in tone; broad skies and swaying grass are shot in muted, muddy greens and browns. But it hides a deeply sinister undercurrent. Both have spied a fishing hook in the water (which seems placed to act as a kind of psychic totem of their connectedness - a signifier of death), and both instinctively know Enokizu wants to kill Hisano. She nonchalantly tells him not to kill her (she has discovered, from Haru, his ruse as a professor), and then reveals a past of imprisonment for murder herself. The two seem connected almost cosmically somehow (though he does kill her at a later stage, though, significantly, this occurs off-screen). 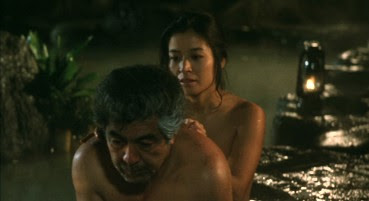 An earlier scene featuring Kazuko (Mitsuko Baisho) and Shizuo – one of their first together, after she leaves the family home – has them initially both innocently naked in a hot spring. Shizuo is begging Kazuko to return home out of concern for Enokizu, but she only agrees to return for Shizuo’s benefit; divulging an erotic attraction to her own father-in-law in the process. The forthright, Christian Shizuo is close to being drawn in by her caresses but moves away out of religious and familial duty. The rest of the film links these two pairings together, more so the latter pair who appear inseparable; Kazuko is devoted to Shizuo in every way. The film’s ending belongs to the two of them: together they scatter Enokizu’s ashes from a cliff-top; the pieces of decimated bone are frozen mid air and linger in the final frame as the film ends. In death, it suggests, Enokizu won’t touch Japanese soil again.