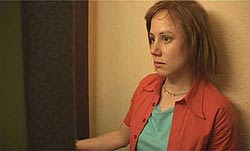 I saw The Forest for the Trees/Der Wald vor lauter Bäumen (2005) purely by chance. It was playing at the 2005 Cambridge Film Festival, so I went on a whim after being intrigued by a single still featured in the brochure (Eva Löbau staring wistfully out of a car window, included below). I'd been interested in trying to ferret out these kinds of unassumingly small-scale, strictly character-based films at the time, and Maren Ade's debut feature ended up being the highlight of the festival.

More often than not, simple and inflexibly straightforward narratives require a commanding presence at their centre to act as a balance to all the simplicity. But The Forest for the Trees has an almost non-entity for its lead character - Melanie Pröschle, played by Löbau. Strangely, instead of diminishing the effect of the film, her not there-ness enhances it tenfold. The whole film is about someone who disappears from the gaze of those around them, despite their best intentions. And whatever someone’s personal experience, it’s sad to say that a lot of what happens here can ring true in any social circle.

Löbau (who I’ve unfortunately not seen in anything before or since) approaches the role of a new schoolteacher – on her own in a relatively small town, making a life for herself in an overcrowded, urban comprehensive school – with a weird kind of pathetic conviction. She’s pretty much almost willingly used as a dogsbody in the job. Initially it’s as if she were a useless bag of bones shoved in bad clothing, and plonked down without being told how to function accordingly with others. Through the film she doesn’t go through any kind of social elevation, and no triumphant message resounds. Her clothes just get worse. 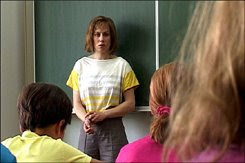 There are scenes that contain such accurately minute instances of estrangement or identification that they concisely penetrate right to the heart of social ostracism, resulting in some effectively poignant filmmaking: the nervous hesitation as Melanie pauses before entering her classroom for the first time (the raucous kids inside are like baying wolves to her); the ineptitude that arises when no-one wants to talk to her at a party, even though she persists and persists; and it’s in the sparse and scattered objects that litter Melanie’s poky flat like beacons of distress. The attention paid to these things is minimal, often not the direct focus of a scene, but incredibly telling.

It’s in the making of new friends that she falls flat on her arse. Melanie is so timid and socially awkward that purposeful acceptance is a constant battle. It's like Melanie sees it as her reason for being. And work merely brings a truckload of shitty problems. The thing is, the film doesn’t exactly go down the route in celebrating the meek in the way that many of those championing-the-underdog type films do, whereby the “loser” is allowed some kind of celebratory triumph by the end. Here the character just takes herself out of the situation. Ade’s camera detects Melanie out of the bustle of an overcrowded populace, tracks her in potentially awkward situations, and then, like a concerned case worker, nudges her to do something about them. The film unwaveringly shows what happens when the people around you simply don’t want you there.

I admired the approach Ade took in terms of constructing the film’s bleak, carefully orchestrated tone; it’s unstrained, unfussy and downright spartan. Much of this is achieved through the editing; its efficiency creates dramatic, and occasionally funny, moments with ease. I was amazed to discover that this was Ade’s first feature. Although I can’t quite see the overall comparisons to Fassbinder that some critics have afforded the film, it doesn’t fall shy of some allusions. (In some ways Brigitte Mira's lonely cleaning woman Emmi in Ali: Fear Eats the Soul (1974) could almost be an older version of Melanie.) 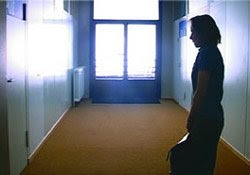 The right actress completely makes the film. In fact Löbau was, by-and-large, my favourite female performance from the last few years. It's the first time in a long time - maybe since Julianne Moore in Safe (1995), or going further back, Gena Rowlands in A Woman Under the Influence (1974), or more recently, but to a slightly lesser extent, Kate Dollenmayer in Funny Ha Ha (2002) - where I've really wanted something unbelievable, something miraculous even, to occur in a character’s life; something to jolt them off their ill-judged path to social oblivion. But a tug-of-war occurs; conversely, I wouldn't want them to behave in any other way; these women are individual to the core. Löbau broke my heart in the role. I felt both sympathetic to her, and strangely protective of her, despite sharing little of her experiences (although I do share a similar job description, so I guess I can identify with some of the film's situations, which is perhaps why I took to the film as eagerly as I did). Either way, identification can be universal. Something about Melanie appealed to me in an unfeigned and affecting way. Certain fictional creations somehow manage to strike a wholly personal chord, one that reaches out to relate beyond mere viewership. 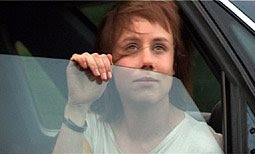 The level of empathy or sympathy for Melanie, and how much anyone will get out of the film is obviously dependant on individual interpretation, and it also either makes the film work or closes its world off. Some scenes are almost too embarrassing to watch that you want to look away; some moments would be funny - like something out of The Office - if they weren't so painful. But through Löbau’s performance, the film has a character with whom it's hard not to feel something for (which is especially commendable considering the complex shading of personality added to the character as the narrative progresses). It's very much a small and unassuming film with no grandstanding moments; it has at its centre a performance full of complexity and awkward charm, however cringe inducing. You don't get to see characters like this very often, if at all.

Toward the end, a sequence occurs which details with simple urgency all the resignation and sheer fucked-off-ness Melanie feels. (It relates to the bit I mentioned earlier about Melanie taking herself out of the situation.) A Grandaddy song, 'He's Simple, He's Dumb, He's the Pilot', fades in on the soundtrack and something unexpected and unbelievably heartbreaking happens without much indication, but with plenty of justification in hindsight to how Melanie reached this point. It’s probably my favourite moment in any film from 2005, and possibly the decade so far.