Cosy Christmas films: the case against 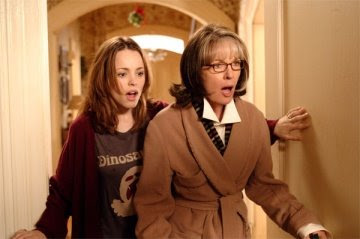 The Family Stone: Diane Keaton realises that she used to be in good films like Annie Hall

If you’re not a full-tilt, liberal-minded, vaguely bohemian middle-class-type, you won’t fit inside the Stone family’s cosy Christmas bubble. This is the vibe that The Family Stone (Thomas Bezucha, 2005) surreptitiously gives off as its guiding ethic. It’s Christmas and the family are going about their dizzy festive business. In comes a woman (Sarah Jessica Parker), about to marry one of Stone parents Craig T. Nelson and Diane Keaton’s sons (Dermot Mulroney), but she doesn’t quite fit their cuddly template. They run her over the hot coals as some kind of liberal attitudes test, and then, when she proves to be an alien entity (i.e. not a walking greetings card sentiment), they proceed to try and oust her from Mulroney’s affections. So, not so liberal after all then.

Without any reluctance I found myself championing Parker’s character. Indeed, her “cold, uptight bitch” had more characterisation than the entire Stone clan put together: daughter Rachel McAdams signals her stroppiness purely by complaining about her bedroom; Tyrone Giordano and Brian J. White – as the deaf, gay son and his black boyfriend - are there to up the look-at-how-painfully-inclusive-we-all-are quotient and little else; Diane Keaton, as the insufferable matriarch, conveys her terminal illness by looking vacantly out of the window at opportune moments; and Nelson is pretty much absent for most of the story.

Parker’s (who gives a taut and credible performance, her best post-Sex in the City TV show – and was rightly singled out for a Golden Globe nomination here) scenes with eternal slacker and brother-in-law-to-be Luke Wilson are the best in the film. They are the only two characters that literally stand out from the bunch by not conforming to their exclusive love fest. Everyone else is either a flat-pack variation on Hollywood’s all-purpose, box-ticking PC package (black and deaf homosexuals!) or they’re drawn-from-stock family members with equally standard personality traits.

One scene has the clan around the table for Christmas dinner: the subject of ‘nature or nurture’ regarding homosexuality comes up. Before the meal, the family, behind Parker’s back, bemoan, “she isn’t making an effort to get to know [them]”. At the dinner Parker attempts to engage in the gay debate by offering up the age-old idea that, given the option, "someone wouldn’t necessarily choose to be gay." Because there are two token gay characters present, the over-sensitive family take it upon themselves to be outraged. Parker’s character – not shown to be any kind of homophobe at all anywhere in the film – is told to shut up, and she duly flees the scene. “If I had my way, all of my son’s would be gay – that way they’d never want to leave me,” intones Keaton. So, all gay men would instinctively and permanently cling to their mother’s bosom eh, Ms. stone? The family’s counter argument here is the weakest of retorts; its forced, over-the-top correctness becomes noisome, and the line between genuinely well-intended inclusiveness and clichéd offensiveness is straddled without ado. It’s all so blatantly, falsely ingratiating.

Everyone of course gets on famously at the end, after a bit of rote tragedy and some life-affirming lessons (well, only after Parker proves that she’s not actually a bitch after all by giving everyone a surprise heartfelt Christmas present – she literally has to buy their affection), and all is well in their world. Lesson learned, then. The Family Stone is less like a Christmas gift, and more like the used wrapping paper that ends up on the floor.