Masters of Horror: joy on and off a television screen 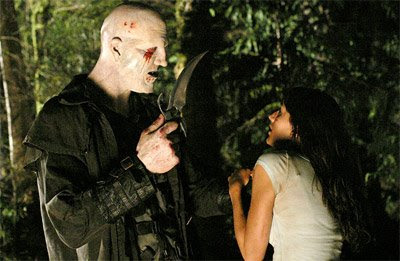 One Sunday night back in 2006 I sat down to watch the first episode in Mick Garris’ largely very good ‘Masters of Horror’ series of hour-long films, Incident On and Off a Mountain Road (Don Coscarelli, 2005). There seemed nothing more perfect to me than a late night, no fuss, honest-to-goodness bite-size 60-minutes of trashy televised gore. I watched it again recently, and because it was the first one I saw, and for all the above reasons and then some, it's therefore stayed with me the longest. There were a few better episodes in the series - namely John carpenter’s excellent Cigarette Burns (also 2005) - and I still have a few more yet to see, but this one struck a chord with me.

Incident was the perfect introduction to the series. Its key theme fits directly into one of the fundamental joys of watching horror: the act of looking with fearful eyes. Eyes reveal a horror movie victim’s fears; moonlit, their teary glint can give away their whereabouts in an isolated forest clearing, as it does in Incident – and trembling, these teary orbs are the prized organs that the killer here values so much.

It opens on familiar territory, which invokes the title from the start: a car snaking its way down a mountain road in the dead of night, lit solely by the moon’s luminous glare. Its driver, Ellen (Bree Turner), crashes into an abandoned car. There is no sign of a driver and something sinister is stirring in the surrounding trees. A forest dwelling half-man-half-creature (John DeSantis) has killed the driver and now sets his sights on Ellen. A panicked chase ensues, where Ellen uses some cunning tricks to evade the monster, thanks to some survival lessons from her militarist husband (Ethan Embrey), weaved throughout the slim-lined plot as a series of flashbacks that allow an insight into Ellen’s past and reveal something intrinsically terrifying about her current situation.

Under Garris’ tutelage, Coscarelli was given free reign to film whichever scary tale he desired. He chose to revisit the short fiction of novelist Joe R. Lansdale (who wrote the short story for his Bubba Ho-Tep(2002)). Incident – perhaps because it was first in the series – is a rather traditional and straightforward introduction, and slightly tamer than many of the resulting episodes. Takashi Miike’s Imprint (which, due to its excessively visceral nature, was refused an airing on US television) and Dario Argento’s Jenifer, for example, narratively played around with genre conventions and the extremities of televised gore, but there are still a few giddy, twisted thrills in Incident that, although having been somewhat previously road-tested in the likes of I Know What You Did Last Summer (1997) and the two Jeepers Creepers (2001/2003) films, effectively convey a sense of fear through the set up, then unravelling, of queasy situations in an ultimately surprising manner: those flashback lessons are deployed for an inspired and unexpected reason.

Incident features the standard heroine in peril – the typical final girl scenario is adhered to – but it’s one of the only entries that does this. Others (Carpenter’s Cigarette Burns, Stuart Gordon’s Dreams in the Witch House) focus on male protagonists. This adds to Incident’s conventional feel, though Coscarelli does mess with the tradition somewhat. But by the time Ellen finds herself tied up in a basement, with only a demented old man (Coscarelli veteran Angus Scrimm) for company there are only so many outcomes available.

Though it lacks originality, there is a nostalgic thrill to the film. The palpable joy from watching a concise horror played out with efficient skill from a film-maker who clearly respects and relishes the genre remains throughout its short duration. It plays up to the kinds of workaday ‘80s video horrors that paved the path for an event like Masters of Horror. Although it never pushes the genre’s limits, it proves to be a serviceable, bite-size introduction to a series that is welcome viewing for any horror aficionado.