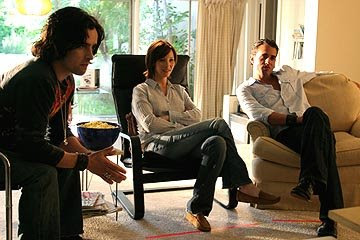 One of Happy Endings (Don Roos, 2005) many problems were its awful inter-titles scattered throughout. They function as character introductions (with roughly eight main characters in the film, they have their work cut out) and reveal choice plot points in a twee, chatty manner. One self-referentially says: “it’s a comedy; sort of”. And the film is a comedy. Sort of. But it’s just not really that funny.

The problem with these inter-titles is that they do what the script itself should’ve done naturally. I don’t know, I found it more lazy than amusing. It points to a lack of confidence in the script, and suspiciously whiffs of afterthought due to, perhaps, a test audience’s confusion with all the different characters. It’s not really that hard to follow though. For all the Short Cuts (1993)-style interweaving of desperate lives, it’s actually easy to get to grips with all the comings and goings of its LA inhabitants. Roos is treating his audience like idiots if he thinks they need extra pointers as to what’s going on.

There’s a whole host of issues that Happy Endings maps out, and Roos ambitiously sets them up: infidelity, adoption, trials of the loved and the lovelorn, sexual identity, parenting, coming out troubles, and so on. It reads like a check-list of themes for an Oprah book club title though. And this is where its problem lies. In covering such a vast amount of self-help issues, it doesn’t really find the space to cover any of them fully or allow for any depth. I could’ve done without at least half of the above plot strands and had the film simply concentrate on a choice few, so that the characters experiencing these varying tribulations could blossom more fully within their own situations. Instead it spends too much time on three or four plot threads and leaves the remaining ones inadequately explored (in this respect it feels a lot like 2001’s similarly multi-charactered, 13 Conversations About One Thing).

The acting by everyone is good, though. Lisa Kudrow (in arguably her best role yet), Maggie Gyllenhaal, Tom Arnold and Laura Dern (who is always worth watching) stand out more prominently than the rest because their characters are well defined. Jesse Bradford, Steve Coogan, Jason Ritter, David Sutcliffe and Sarah Clarke get the short end of the stick, particularly the last three; their characters get less attention from the script and are, by and large, merely there to support their on-screen companions or amble around the edge of the action. 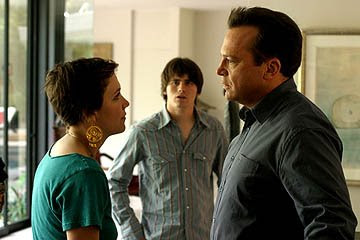 There are some nice scenes between Bradford and Kudrow. As a woman who’s being blackmailed by a novice filmmaker – a motor-mouth whipper-snapper in the mould of Tarantino – Kudrow plays well with Bradford. Their coupling is quite affecting despite the implausibility of the premise; their meeting created to transpire into a quirky and charming mismatch, but feeling more like a shoehorned contrivance ultimately. Their scenes together, once we get to know both better, are quite sweet. The best storyline, however, concerns Maggie Gyllenhaal’s gold-digging bar singer, who essentially gets to play the Christina Ricci ‘bitch-in-a-bathing-suit’ role from Roos’ overall much sharper, funnier The Opposite of Sex (1998) only with more flair and a harder edge (there’s even a poolside seduction scene just like in that film, but more than anything it exposes Roos’ rather shallow puddle of ideas).

The film feels longer than it should be, too. Robert Altman (with Short Cuts, The Player (1992) and Nashville (1975), for example) and P.T. Anderson (with Magnolia (1999) and Boogie Nights (1997)) wrote a wider range of complex characters to sustain their respective films’ long running times, but Roos’ stories are stretched out thinly even at just over two hours. By two-thirds of the way through, a feeling of déjà vu sinks in, and the only thing I was actually happy about was the ending: it finally had one.

One thing, extraneous to the events in film but still linked integrally to it, concerning Roos feelings for another recent gay-themed film, Brokeback Mountain (Ang Lee, 2005), struck me as hollow. I remember reading an interview at the time of the film's release about Roos disliking Brokeback for its lack of real gay feeling and retrogressiveness. He complained that Lee’s film “tells the same old story… it’s sad, it’s really lonely, people hate you. It’s tragic.” But I think he’s missing the point. Brokeback may be solemn in tone and concern an age-old gay issue, but it ultimately explores it as a proactive thing, despite all its prolonged heartache and inclusion of period social taboos.

Roos wants pro-activeness for his film – albeit under different circumstances – but he doesn’t quite achieve it. There’s a big difference between Endings and Brokeback, of course (they are after all only really tenuously alike), but bemoaning a more successful gay-themed film (one made by a straight man) for what he sees as a lack of honest gayness smacks of obtuse envy. Roos forgets that Lee’s film deliberately bypasses socio-political ambition to focus on snatched moments of intimacy and the painful, lifelong straining effects of repressed desire. His whole rant, in reference to why Ennis and Jack don’t elope together - “Guys, get a map. Go to New York. Go to LA. Your problems will be over if you just get a map!” - is the same (now actually quite old-hat) retort that I’ve read many times before by easily-displeased critics and audiences when looking for simplistic explanations.

The thing is, it wasn’t about just “getting away” for them. Of course it was about them finding a place of their own, but it was also about the pull of family commitment on their psyches (especially where Ennis was concerned). “The furthest I’ve travelled is around the handle of a coffee pot”, states Ennis at one particularly crucial point in Brokeback: he wasn’t one for travelling far, such was the familiarity and tight grip of mountain life. Roos possibly missed this little nugget of acute dialogue.

The irony is, as a gay filmmaker himself he hasn’t particularly made a film that wholeheartedly gets to the core of gay lifestyles. The two films are miles apart, but both in their own ways want to pro-actively say the same things; I thought Roos would at least put his money where his mouth is, but he doesn’t. Sure, he’s attempting contemporary social comment with his upwardly mobile gay dads and pained stories of rich L.A. teens’ coming out woes, but these issues aren’t fully explored as much as they could have been. And the fact Endings features three full-on straight sex scenes, but only one gay kiss is a bit hard to swallow coming from the man who readily vents his distaste for others’ attempts to convey gay relationships in a more all-encompassing manner. I couldn’t really believe his gall. Brokeback isn’t exactly explicit, but at least there’s that tent scene. Roos’ gay characters just meander down the middle somewhere, not really saying or, more precisely, doing anything significant to make them feel real at all.