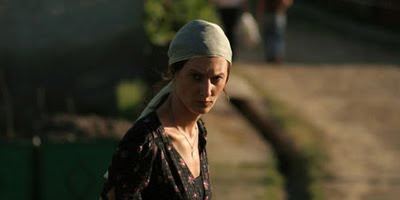 Out of the debut films last year, there were several that indicated a real fresh and unique talent behind the camera. Charlie Kaufman (Synecdoche, New York), Marek Losey (The Hide), Tomas Alfredson (Let the Right One In), Eran Creevy (Shifty), Alexandre Bustillo & Julien Maury (Inside), Samantha Morton (The Unloved), Gerald McMorrow (Franklyn), Armando Iannucci (In the Loop), Duane Hopkins (Better Things), Neil Blomkamp (District 9), Courtney Hunt (Frozen River), Mark Tonderai (Hush) and Duncan Jones (Moon) all made their mark with worthwhile or great first features in '09; and I've mentioned Gideon Koppel (sleep furiously) and Nacho Vigalondo (Timecrimes) in detail for this top ten already. But one first film stood out as far and away the most surprising, accomplished and bold of all that I saw: Peter Strickland's Katalin Varga, a unique revenge drama set in the Székely area of Transylvania in Romania.

It's an independent British film (though dialogue is in Romanian and Hungarian) in the truest sense. Strickland used a £25,000 inheritance and years of struggle and hard work to get it made - proof that believing in your vision and sticking to it can pay off. Katalin Varga was released in October in the UK last year and garnered some great reviews and a clutch of awards (including the Silver Berlin Bear award for Outstanding Artistic Contribution, for its sublime sound design, at last year's Berlin International Film Festival). The film opens with Katalin (Péter) telling her husband (László Mátray) that their son, Orbán (Tankó), who he thought was his is actually someone else's - a man from her past who Katalin, after being ostracised from her hometown by her husband, now intends to visit in order to gain answers. Katalin and Orbán travel on a horse-drawn cart (the film is set in present day, despite initial appearances) through the fields and forests of the Carpathians to Jádszereda where things get just a bit more complicated for Katalin.

From the start a deeply forbidding atmosphere sets a tone that the film carefully maintains at a constant unsettling level throughout. Bad things are afoot and not knowing what they'll be or from where they will arise creates an intense aura around the narrative. We know Katalin is bound to track down the man, Antal Borlan (Pálffy), who raped her eleven years ago, but we aren't so sure what she'll do once she finds him (though if the killing she commits, of one of Antal's co-assailants, on route - an act that comes back to haunt Katalin in unexpected ways - is a bar by which to measure her revenge tactics, it clearly ain't gonna be an amicable reunion). 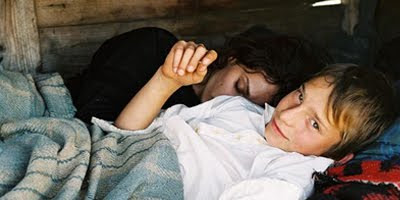 The entire film is permeated with this creepy and elusive sense of dread - it's evident Strickland has a sure foot dipped in the horror genre. He has referenced the influence of Eraserhead (1977) on his debut (especially in the design of the sound and music), and there are perceptible hints of Jaromil Jires' Valerie and Her Week of Wonders (1970) and Bergman's The Virgin Spring (1960) (and by association, though to a lesser degree, Meir Zarchi's I Spit on Your Grave (1978)), also. But equally Strickland carves out his own style, and gives his film its own unique flavour. There are parts of it that feel akin to another forest-set exploration of allegory-tinted female fury from last year, Lars von Trier's Antichrist. But I found Katalin to be far more atmospherically alluring, and vastly creepier, because it only barely hints at the unknowable threat lurking within the dark trees that surround the characters. Strickland's open, chartless terrains are vaporous with uncanny fear, unlike the contrived, enclosed Eden of psychosis seen von Trier's film. (But to give Antichrist its due, each frame of it was stunningly composed and photographed.)

Hilda Péter gives an astounding performance as Katalin. For me it was the best by an actress all last year. We are never deliberately let on to any of Katalin's interior thoughts or feelings - her motivations, despite what's apparent from the outset, are kept cloudy and near impenetrable for the duration of her travels; she never explicitly mentions the reason for the journey to her son, and therefore the audience. We follow her closely but little is given away as to her true state of mind. Throughout she slyly alternates between being the practical, caring mother to Orbán and a guileful, fierce-tempered hellcat pushed on by her yearning for vengeance. Péter never lets Katalin appear as a victim at any point, and we have to work hard to sympathise with her at times. She is, by turns, fretful and barn-storming in the role, propelled by the knackered remnants of nervous energy. At one point Katalin stands at the edge of a forest opening, and the camera - accompanied by the baleful drone of the immaculate sound design - mimics her hard stare into the depthless unknown; Katalin's eyes are blankly fixed on some unspecified point, or perhaps a memory or intention, beyond what we are able to fathom. She's rooted to the spot, almost possessed and statue like. It's unnerving, arouses curious mystery, and hints at a possible otherworldly layer of reality occurring alongside the world we can see. It's moments like this that Strickland and his crew - chiefly cinematographer Márk Györi, editor Matyas Fekete and musicians Geoffrey Cox and Steven Stapleton - exhibit their ingenuity and skill in creating visually and aurally textured sequences of a beautifully porous quality, and which I had trouble shifting from my mind long after the film came to its shocking end.

Strickland is already in pre-production on his follow-up feature, tentatively titled 'Berberian Sound Studio'. As far as I know this one will be a strict horror film about a sound engineer working in an Italian film studio. It's a premise that makes the Argento fan in me leap for joy. If Strickland applies here what made Katalin Varga so memorable then it'll surely be one of the must-see films for next year. And I'll bet that in five-or-so years, and after a few more films of the quality of his debut, Strickland will be properly mentioned alongside other singularly artful auteurs such as Lynch and von Trier. Although I think he deserves high enough regard already.
Posted by Craig Bloomfield at 12:00