Kelly Reichardt's second film - the laid-back, minimalist, Oregon-set road movie Old Joy (2006) - made my top films list in 2007. Her third feature Wendy and Lucy (again set in Oregon), another small-scale film about getting in the car and disappearing into the horizon, makes my 2009 list at #4 (I'm guessing I'd like her first one, 1994's River of Grass too, but as yet haven't had the chance to see it). Wendy and Lucy started as 'Train Choir' (the title of its source material - a short story by Jonathan Raymond, who also wrote the short for Old Joy and is again collaborating with Reichardt on her next film, Meek's Cutoff, also starring Michelle Williams and due later this year) from his 2009 collection 'Livability'. The story was a concisely detailed and deftly written character piece; much of what happens in it is interpreted almost verbatim in the film.

The two reacquainted male friends taking a late shot at driving into the Great Wide Open in Old Joy got to where they were going (a hot spring in the Mount Hood National Forest), but Wendy and her dog Lucy barely reach the halfway mark: on route from Indiana to a job at an Alaskan fish cannery, cash-strapped Wendy's car stops working. From this single seemingly inconsequential diversion, and because of her rapidly diminishing funds, a barrage of further set-backs occur - not least losing Lucy to the dog pound when she's late to retrieve her from outside a store (due to being arrested for shoplifting dog food). The gradual snowballing of these needless events come with massive physical and emotional drawbacks for Wendy, which have painful consequences by the end of the film. Getting on the road to the American dream doesn't even get off the starting blocks. That whole 'it's the journey, not the destination' adage is taken as some kind of bad joke and flipped around to reveal a sad and tired truth behind it. It's not the journey or the destination: the entire film simply charts an unfortunate, though life-changing, pit stop. 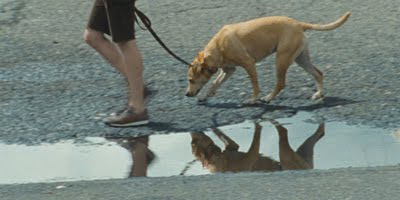 Reichardt is a filmmaker I can easily admire. One reason of many being that she creates beautifully precise and streamlined drama in her work with little fuss, and without any needlessly protracted scenes of dawdling narrative or character exposition: you get gently ushered alongside her protagonists at an indeterminate time and place, with the bigger picture hazily stencilled in. The finer details are all present, though half hidden, and ready to be pieced together as the story winds itself forward. (It helps having instinctive, naturally gifted actors such as Michelle Williams, Will Oldham and Daniel London etc crafting subtle and note-perfect performances for her.)

Reichardt's concerns appear deceptively minor at the outset, but they contain intricate layers of clear-focused detail and social urgency on closer examination. It's clear that money is the root of Wendy's problems - not having it directly causes the downturn in her life - but there's also an interwoven commentary on miscommunication reverberating throughout the film (crossed wires and miscommunication form part of Old Joy's narrative, too - where one friend's fond remembrance and hopeful rekindling of a long-ago relationship is the other's largely-forgotten, now casually re-established acquaintance). Whether it's Wendy's phone call home to reluctantly ask her brother to wire her some money (only to be met with vague dismissal at the other end), the incomprehensible babbling of a strange homeless guy who stumbles upon Wendy sleeping rough, or the jobsworth store clerk's deliberate refusal to listen to Wendy's defence of her shoplifting. No one in the film seems to relate on the same plane verbally or socially.

There are (semi-ironic?) near-invisible divisions not just between those with resources - be it money, car parts or even dog food - and those without, but those with easily resolvable issues (however minor they appear) and those who lack the capacity to merely entertain an understanding of someone else's needs. And miscommunication breeds on facts, circumstances and right-place-right-time scenarios becoming skewed. In the age of instant communication and access to any and all information all the time anywhere right now, somehow even knowing, say, precisely when a garage will be open (and arriving at the correct time to simply get news on a car repair), or getting the timing right in being able to speak to the very person responsible for the re-homing of your lost dog, is akin to extracting blood from a stone. These situations are of course particular to the film, but such cases of ill luck randomly dished out may well feel familiar. Simply getting stuff done means compromise and conversation conducted in good order. Reichardt, via Raymond, is keenly attuned to how awry this can go from the most uncomplicated of starting points; her intuition for the desperate and finer details of everyday life resonates in a wholly universal way. 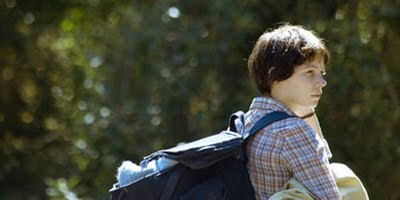 All aspects of Wendy and Lucy are exquisitely handled - whether they are major events or throwaway moments. The only person who Wendy has any halfway meaningful interaction with, outside of her affectionate bond with Lucy, is Wally (Dalton), an elderly security guard who offers her use of his mobile phone (and, in one truly lovely, totally heartbreaking scene, a token gesture of some money). Reichardt doesn't make him the typically kindly grandfather figure that might be expected from a much less perceptive, more sugar-coated treatment of this kind of character perhaps found in the Hollywood model. He is merely someone who happens to be in the same place, at the same time, and, more significantly, the one person without an agenda.

The ending - which I don't want to reveal to anyone keen to see the film - not that it contains a massively unguessable plot turn as such, but because it is so carefully and effectively put together to warrant running the risk of ruin - is both an apt and unvarnished resolution and a perfectly-arrived-at and unexpected end point of the journey. It's one of the very best sequences in the film; Williams' wonderful performance is never better than in these last scenes. Wendy's travels continue, but Reichardt has given us all the story we need. This small-scale tale of one woman and her dog tells us more about recession-era America (and invariably elsewhere) today than many a film double its meagre length. There is truthful sentiment in Wendy and Lucy, but nowhere are there sentimental untruths. Think of it as a condensed, bullshit- and sugar-free Marley & Me if you like.
Posted by Craig Bloomfield at 23:07