If you're looking for a triple bill of the elegantly evil variety then the trio of films below, with these women...

Fiona Shaw (who is surrendering all notion of sanity. And styling) 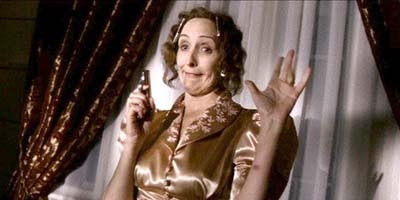 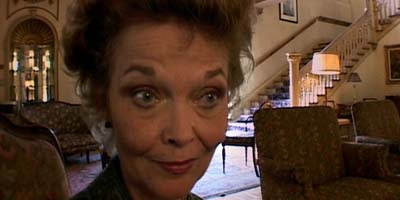 Catherine Bégin (who is about to begin a black-hearted beguine) 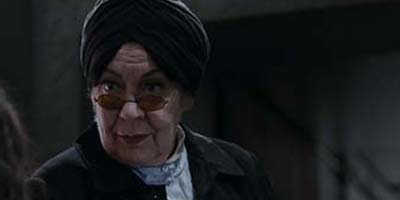 ...will serve you well. You may have a hellish time of it, but hey, it's worth the experience.

The Black Dahlia (2006), Inland Empire (2006) and Martyrs (2008) currently make up my favourite triple-bill of frightful female fiendishness. If you have, say, a spare 400+ minutes then I suggest you line this trio up for a long night-of-the-soul's entertainment. While away the witching hour with these malevolent matriarchs, why don't you.

All three appear in their respective movies as almost otherworldly figureheads of unthinkable cults; overseeing murderous events in opulent, probably haunted houses. (Well, in Zabriskie's case it ain't her house, she lives "just down the way, tucked back in the small woods"; she's just popped around Laura Dern's for a nice morning coffee and a light... premonition of doom.) They appear gargoyle-like, spout menacing, ridiculous words of warning and may all very well be madder than a bag of badgers, but I wouldn't say it to their faces: one will throw one hell of a shitfit over dinner; one will scream "BRUTAL FUCKING MUHR-DHER!"; and the other will strip the skin from your bones. Literally. You wouldn't want to meet them in a darkened room - or even a daylit street for that matter - but on screen they make for a fine evening's company.

They're so fearful and mysterious, in fact, that a couple of them don't even have names: two merely go by Mademoiselle and Visitor #1. (The third goes by Ramona Linscott, which admittedly could be the nom de plume of an ageing English crime writer.) But all three deserve more credit than they received for such towering, monstrously good performances. Each made more of an impact on me in under fifteen minutes of screen time than many lead performances have in recent films; Shaw and Zabriskie indeed made my top acting lists for '06 and '07 respectively; Bégin was just outside the top ten in '09.

But if Judi Dench can win an Oscar for just showing up on set dressed as Queen Elizabeth I for Shakespeare in Love - with Helen Mirren winning gold for a full reign as The Queen mark 2, and Meryl Streep honoured for "having her certainty" and eating it (along with the scenery) in Doubt - then, I say, this sinister sisterhood should be getting recognition as well. If you want fierce female scene-stealers, these three rob their films dry - and leave you baffled, rattled and quivering in their wake. Also glad that there are still juicy roles for talented actresses over the age of 40 to be savoured.

They all trip well over the top performance-wise, and each one ratchets up the camp (with a side of ham) to absurdly villainous heights, but they make an indelible mark in the dark corners of their films. If Brian De Palma, David Lynch and Pascal Laugier all recognise a good (bad) woman when they see one, then so should we. I'd say watch them in chronological order. That way, you get to see the performances get more diabolically delicious as the night draws to a close.
Posted by Craig Bloomfield at 14:55