Bullet Points of the Dead: The Walking Dead Episode 1

The new zombie series The Walking Dead started last Friday night in the UK (FX channel at 10:00pm). I'd been waiting a while for it and am excited that it's now being shown, as horror-based serials such as this aren't too commonplace on today's TV schedules. Who would have thought there would one day be a regular zombie show on the telly. It wasn't so long ago that a variety zombie movies were struggling to resurface and get financing (I'm thinking no longer than 12 years). Nowadays, they're ten-a-penny. Just goes to show that, sooner or later, when something catches on it will likely expand into other platforms.

But, then again, two years ago we had the excellent Big Brother-meets-Dawn of the Dead three-parter Dead Set. Three episodes wasn't enough, though, however good they were. The Walking Dead has so far gone down well in the US, where it's showing a week ahead of the UK. (Isn't that always the way?) I'm pretty certain that if its success continues, and the fans and fair-weather watchers alike rally around it, it will go ahead with a second series (there are murmurs already, apparently). 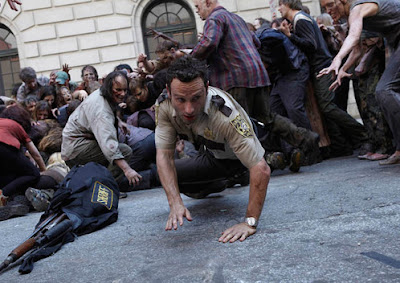 So to acknowledge this zombie telly invasion, to give a hearty tip of the hat in its grim and gory direction, and to generally have a place to keep some ongoing, quickly-formed thoughts on it (as observational notes, or some such thing), I wanted to (try to) write an entry each week for its six-week duration, starting today. Three bullet-pointed paragraphs on each episode.

I'm not entirely sure if it will turn out to be a Lost-style meander, a Heroes-style elaborate concoction, or a Harper's Island-style saga. It's serial TV, but as bite-sized tellyfilms (not a million miles away from, say, the Master of Horror series). Its heart lies in the movies though. I'm sure 28 Days Later... has been, or will certainly be mentioned as a reference point, among many other similar movies. (Romero is a given.) This first episode built intrigue and showed the seeds of continuing drama and what appears to be a sturdy longevity. I'm looking forward to episode two.
Posted by Craig Bloomfield at 22:01