At the Cinema: Skyline 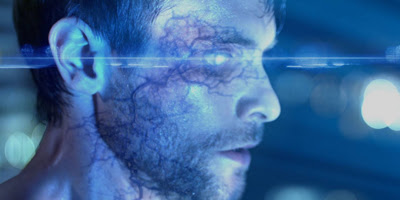 Skyline is a big, messy monstrosity. It's second-tier sci-fi but with nary a hint of shyness. It's a fully self-aware B-Movie: a monster flick, proud to be one, and little more. For what it’s worth, it’s a fun ride. The plot in short: aliens descend on L.A. to collect people for some ungodly reason; a disposable bunch of innocuous hip types hide out in an apartment complex, to ponder which option – fight or flight – is the best open to them. Good luck with either, folks. There’s something undeniably and inexcusably derivative embedded deep down in its DNA. There are whopping great big pointers to Independence Day and its ilk (Skyline has a distinctly mid-‘90s sheen), and an unavoidable wink to the recent District 9. There is, though, barely perceptible from the sidelines, the faintest, haziest vapour of Cronenberg, too: a sliver of Shivers. And hurrah to that.

In one scene, in an underground car park, an alien being’s tentacled limb grasps a man’s head – his face displaying blackened, possessed eyes – and wields it aloft as if it were using him to channel some terrible psychic message outward. The image is memorable – well, at least as memorable a single, riveting image in a harmlessly mediocre film (which this is) as the red-eyed jungle beast in Uncle Boonmee. The action in the film’s hectic, get-out-of-the-city! mid-section forms the film’s most entertaining sequence – more so than the obviously eye-grabbing effects shots of the spaceships (which look like someone had tried to sellotape a load of twisted metal shavings back into their original objects and failed miserably) breaking through the smoggy L.A. sky and hoovering up humans like specks of dirt. 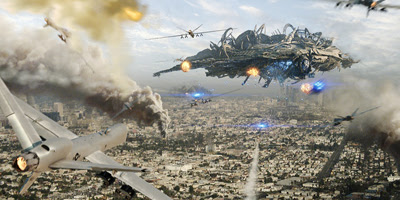 It’s been reviewed rather badly – and unfairly, if you ask me. The overwhelmingly negative and, to be honest, downright sniffy comments it's mostly garnered so far seem to miss the point. It's ridiculous cheese – workmanlike low-budget tat that found a few extra quid down the back of the sofa, and made it stretch far so it could have its day in broad daylight (albeit in a darkened auditorium). I think perhaps the fact that it’s actually on the big screen might be baffling folks. If it were to pop up on a Sci-Fi channel, late at night and unannounced, folk would likely ask why it didn't get a proper theatrical release. However, on the big screen it gets derided for its cheap and wonky tone and z-grade edges. It can't win. The equally shamelessly imitative, woeful and, yes, tin-bucket fun Piranha 3D got off lightly, then.

I’m glad Skyline made the marquees. On occasion “lesser” sci-fi yarns such as this often contain one or two inspired moments that the makers of prestigious and sprawling sci-fi yawns - the Solaris remake, say - struggle to come up with over their films' entire run times. It's well worth its weight in aluminium. (It ultimately falls squarely in line with other recent, ridiculous DVD-only titles Infestation and The Blackout.) It’s not entirely camp enough for retweetably naff classic status, and it has barely an ounce of genuine charm to call its own, but it does have a ridiculous desire to entertain – and entertain hard. And it's easier on the eye than either Transformers. Remember, a B-Movie given a free theatrical pass and let loose on the box office is nothing to be wary of. Take a closer look before you shoot it down. Somehow I feel that Roger Corman might approve. William Castle certainly would have.
Posted by Craig Bloomfield at 22:00