Great 2010 Moment: Closing the Door on Julianne Moore in A Single Man 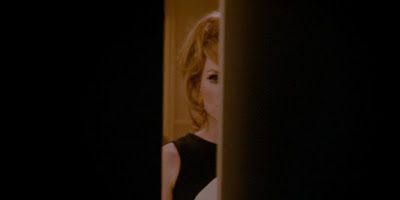 George (Colin Firth) slowly closes the door on Charley (Julianne Moore) in Tom Ford's A Single Man (2009). This is our - and George's - last glimpse of his longtime friend and confidante. It's perhaps the saddest moment in an altogether inherently saddening film; the moment which most pertinently breaks through the hazy, slackened glaze of their sozzled LA lives to speak volumes about longing, friendship and that old mainstay of passionate cinema, unrequited love. It's one of the film's many wonderful instances where looks and gestures do the hard work. Moore's eyes tell everything. And Ford's camera – positioned, as it is, alongside Firth as he departs – lingers a beat longer than George to capture Charley's final heartbreaking gaze: she somehow knows, as of course do we, that this is the last time she will ever see him. Her world is reduced to a slowly diminishing sliver of light between two doors; then it disappears with a quick and – I like to think – reluctant edit. I hope Ford's follow-up film contains such intricate instances of visual perspicacity – along with, perhaps, more great eyework from Ms. Moore.
Posted by Craig Bloomfield at 15:25