Watched, And with Time to Spare: 5 Great Short Films from 2010

Would you class a short as a film done and dusted in under an hour? Or is it generally categorised as a film we move on from in a much shorter amount of time? Is there even a given rule on this? Does it matter? No, I doubt it. But I've always stuck to a (self-imposed?) guide that it's a short if it's done in under 60 mins. These five selections of short filmmaking below were the ones I thought the best made in and/or shown somewhere (usually online) during 2010. However, for all that under-sixty-min malarky none of them actually goes past the twenty-minute mark: short and sweet and to-the-point. 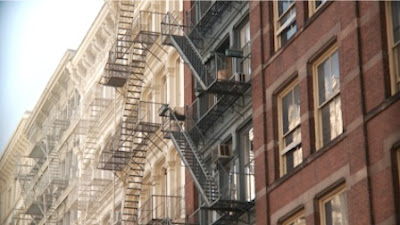 A still from Ira Sachs' wonderful short, Last Address. (from MUBI)
Unlike the many feature-length films I saw last year the short films I watched were fewer in number. I always like to see as many as I can, but it's often a case of limited availability, watch them if they're accessible. But thanks to YouTube, Vimeo, Ubuweb and the many, many other video-sharing websites, which host a wide variety of short films, documentaries, artist videos, and those genuinely belly-laugh-filled comedy clips, and of course the kind and creative people who upload and share them with others, it gets easier by the year. Great stuff all round.

The five films are in some kind of preferential order - there are only five, and they are short enough, it's not terribly difficult - and are fully clickable for everyone to watch. They all made me smile, think, watch closely and easefully ponder in their own equally perfectly-formed ways.

I don't think I saw any other 8 mins. of short filmmaking (or indeed any other kind, whatever the timescale) last year which compactly aroused an openhearted thoughtfulness so well and so succinctly as I did in Ira Sachs' film. A simple, unfettered series of still shots (the sound is indelibly significant too - although no one need explain why) of the exteriors of the last homes of many New York artists who have died of AIDS (and lived in those buildings at the time of their deaths) over the last thirty years. Architectural stillness meets moving image, resulting in some of that old magical cinematic stillness (of the best kind); it's all simply, elegantly considered in Sachs' lovely, uncomplicated film.

Sachs' - who is, in my view, among the best and most interesting American filmmakers working today - own website is here; You can read more info on the film and also watch it here (www.lastaddress.org)

Life and its evolution, composed of paint and patience. And any and every random object available, it seems. This short manages, in under ten minutes, to inject a hefty dose of freshness into short animated filmmaking, and by making it look like well-earned good time. Blu's and David Ellis' Combo from 2009 was great; this 2010 film is stunning. Wonderful invention, showmanship, innovation and endurance. And fun - just imagine a full-length monster movie made in this way. World problems. World joy. Banksy who? Watch Blu.

Essentially an ad for the Italian fashion brand Missoni, and named thusly, the film is a kaleidoscopic barrage of toxic facial urges, torridly lovely colours and slow-warped figures set to a glitching, crunchy dance beat; it's like a 200-page glossy mag singed down to a two-minute fiery flicker. Taken on face value - and why should an Anger film be taken any other way - it works gloriously. It made me smile through a baffled brow... so I watched it three times in a row. I didn't think about clothes at all, however. Crap ad, great film.

It's deceptively daft, lightly moving, strangely cheering, has a simple near-poetic and effective sensibility and contains some great posing-to-camera and one or two sad and abandoned balloons. I liked the ramshackle sense of togetherness and deliberation. It's certainly one of the most interesting things Korine has yet made.

If truth be told, this film is on here because it's Lynch. Ever the faithful devotee, his extended Dior bag ad (short film work or advert - some filmmaking blends auteurism with advertisements these days, then) snags a spot because of all and any leftover thrill and goodwill for, and via, my irreducible love of Inland Empire. There are a few barely perceptible holdovers from his last feature in much of the slender narrative here, which sees Marion Cotillard and Gong Tao glamorously run around Shanghai, whilst the object of oh-so-marketable fashion itself, the blue Dior bag (treated much like the mysterious blue box in Mulholland Dr.), seems to guide their way or enter their unconscious. Or something. I paid little mind to mind-warbling fashionista trifles, but I did like the daft melodramatic gestures conducted in ridiculously glitzy locales. It is rather derivative of much better Lynch, and it is still only a trumped-up advert, but there's mood, however minuscule, in them thar sinister streets and nightscapes which Dave does so adore. Plus, it's miles better than his NYC rat problem ad from the '90s.

There were so many more short films that I watched, but I liked the idea of only including five. Maybe the blog will see more posts on short films during 2011.
Posted by Craig Bloomfield at 19:17