The other day The Film Experience's Nathaniel Rogers asked all contributors for some thoughts on the recent Sight & Sound ten-year poll. Below is what I came up with: 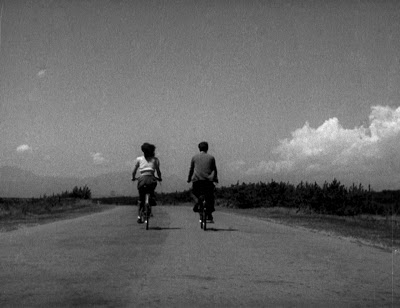 Above: the cycling scene from Yasujirô Ozu's Late Spring/Banshun (1949),
which came out at #15 on the poll and a dead cert for one of my personal best/favourite films of all time.


I never see the harm in assembling lists of films to try and assess what does or doesn’t define tastes. If anything, it’s an ideal prompt to get people talking about films, something I’m sure we’re all always pleased to see happen, and a great way to weigh up viewing habits. The Sight & Sound ten-year poll is a ‘big gun’ in this area of film appreciation. I look forward to it and enjoy mulling over the films selected. (I especially like scanning the individual contributor’s choices as they invariably contain wider diversity, some surprises, a few shocks.) But, as with any vast list-making exercise, it shouldn’t necessarily be seen as gospel. The idea of a Greatest List of All-Time Best Films is a tricky and complex one. The word ‘greatest’ has the ring of impenetrable stature, all too rock solid and time-tested. Maybe it should be: What 10, or 30, or, say, 147 films hit you in the gut the hardest, ripped your heart out (this opens up much creative licence to include, say, overly sentimental weepies or cheap, quickie zombie flicks – films which very rarely, if ever, make any list of ‘best’ but indeed have their place), or even caused you to never see the world the same way again. But, ultimately, it’s all technically the same thing: what are the films that we have collectively or individually connected with on a strong emotional level. There’s no truly definitive answer, so the S&S list is what it is: a solid and fascinating collation of celluloid milestones and pleasures that acts as some kind of cultural barometer as well as a to-(re)watch list for casual moviegoers and cineliterates alike. But, whether you’re pro or con on the practice of ranking films, it does at least inspire some passionate, hearty debate, which is essentially the whole point.
Posted by Craig Bloomfield at 19:35