This week my "Take Three" column (every Sunday, three write-ups on three performances in a supporting/character actor's career) over at The Film Experience features Barbara Steele in Black Sunday, Curse of the Crimson Altar and Shivers. 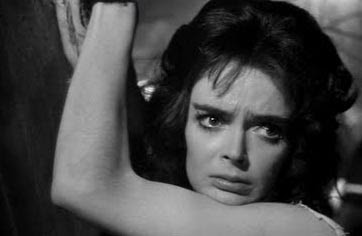 Take One: Black Sunday (1960) In Mario Bava’s Black Sunday (also known as  La maschera del demonio or The Mask of Satan) Steele plays Princess Asa Vajda, a woman put to death by her brother in Moldavia, 1630 only to be resurrected 200 years later as a vampire-witch. Steele also has a second, key role, as local woman Katia Vajda. Princess Asa’s eager to wreak the long-promised revenge upon her descendants – thus proving Sunday is far from a day of rest for the undead. Black Sunday, highly influential and memorable to future horror like Bloody Pit of Horror, Bram Stoker’s Dracula and Sleepy Hollow, features some of Steele’s best work.

Read the rest here
Posted by Craig Bloomfield at 17:17