This week my "Take Three" column (every Sunday, three write-ups on three performances in a supporting/character actor's career) over at The Film Experience features Christopher Walken in True Romance, The Prophecy and The Deer Hunter. 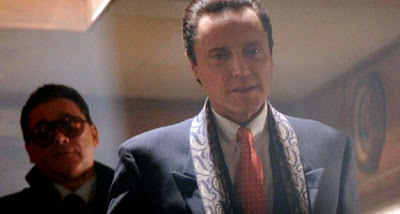 Take One: True Romance (1993) One of Tony Scott’s best loved films was True Romance, based on Quentin Tarantino’s script. And one of its most fondly remembered supporting performances was Walken’s psychotic criminal Vincenzo Coccotti. His sole scene – the ‘Sicilian scene’ as it became dubbed – is often quoted for its spiky dialogue and playful yet intense interaction. In the scene Walken pays a visit to Clifford Worley (Dennis Hopper) for information on the whereabouts of the latter’s son Clarence (Christian Slater). Worley knows that he’s going to die regardless of what he tells Coccotti, so he relates an offending story hoping to insult him as a last FU. For the most part Walken does seemingly very little; Hopper does most of the talking. But his responses, his turning to his henchmen for reactions and hardy yuck-yuck laugh add an amusingly unsettling tension...

Read the rest here
Posted by Craig Bloomfield at 18:27