Here are write-ups on two more performances from the 1990s for the blog 'performance showdown' at Encore's World of Film.

Anjelica Huston as Lilly Dillon in The Grifters 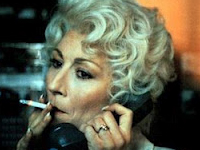 Dressed in sharp blood-red or off-white suits, and with a tight peroxide perm that barely moves, Huston’s long-time matriarch of con Lilly Dillon trembles from adrenaline or nerves in Stephen Frears’ 1991 The Grifters. Huston is magnetic, ferocious and daring; it’s arguably her best and most complex performance. With an impersonal poise and rigid posture, Lilly enters The Grifters’ unforgiving world as a woman who’s constantly evading detection; her appearance pre-altered before the events of its narrative unfold. The cheap yet still glamorous get-up she wears is like a front for the crooks and a disguise for the cops. Lilly’s a mother in name, but not in nature. Her feelings for and about her son Roy (John Cusack), maternal or, particularly, otherwise leave a lot to be desired, shall we say? In the world of pulp-noir Lilly could be a direct descendant of Gloria Grahame’s Debby Marsh in The Big Heat: both got burned by the men in their lives; both got their revenge. Only Lilly’s left with a survivor’s internal scars, deeper and more searing than the reminder on her hand. Watching Lilly ceaselessly stalk and fret her way from one tricky engagement to another – phone booth to hotel, racetrack to apartment – induces a nerve-shredding restlessness; her anxiety is infectious. Huston motors the movie and takes us along for the ride, turning us into unwilling accomplices. Huston successfully manages to transfer both Lilly’s minute mannerisms (twitchy chain-smoking, deceptively vacant glare, her “Los Ang Gleez”) and her grandest, fiercest altercations through a veil of life-eroding, nervy apprehension. It’s not a good idea to be caught up in Lilly’s world, but watching it unfurl from afar is a vicarious thrill. Huston’s tremendous performance ensures we’re right there anyway. She plays if it as if it were a soul-stripping game of poker. 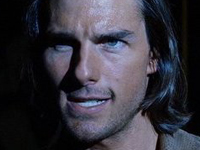 Tom Cruise may have searched and destroyed, and respected cocks and tamed cunts, until he was blue in the face in Magnolia, but four small words cruelly defined his “master of the muffin” Frank T.J. Mackey: I’m quietly judging you. Mid-film, in an interview with female reporter Gwenovier (April Grace), he plays up his role as a spoiled and infamous infotainment megastar to a tee. Gwenovier cuts deep with her questions regarding his elusive family situation. When she presses for a particularly tricky response, he sits silent for what feels like an age; then utters those four words. This comes after some playful yet tense interaction wherein Gwenovier, defiantly immune to his charms until this point, appears to crack; in coy fashion she mentions one of his (deliberately?) undone shirt buttons. Knowingly, like a hunter having ensnared his ‘prey’, he acknowledges her mention and teasingly buttons up. It’s a queasy scene, played perfectly by Cruise and Grace, and points to Mackey’s ability to be snakily duplicitous. Mackey is perhaps Cruise’s best screen creation to date: an arrogant and spite-filled showman spouting invective to all-male crowds on how to “make that lady ‘friend’ your sex-starved servant.” Cruise expresses every one of Frank’s manipulative actions with oily hubris. Early on in the film, when we first see him on stage, he’s lit in stark silhouette, his arms positioned in a robotically phallic stance; he immaturely presents himself to appear like an evangelistic man-god. But really he’s just a spoiled boy with daddy issues. That Cruise makes him intricately complex, troubled and, saddest of all, trapped in a self-imposed emotional coma, is concrete proof that he’s often more than capable to burrow well below his surface action-star persona to convey raging heartfelt depth in a performance.

Note: the Huston write-up has been edited and reworked for this post from the Take Three piece I did on her.
Posted by Craig Bloomfield at 08:39