At the Cinema: The Bad Lieutenant Port of Call: New Orleans 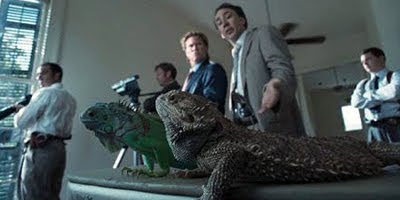 This is Herzog's human aquarium. It's kind of ridiculous, kind of sublime, full of examples of beauty and scum, and always only a few out-of-the-blue incidents away from fully embodying - or indeed transcending - any of those things. He shows post-Katrina New Orleans as a city first steeped in, then drained of, water: all outlying aquatic (reptilian, ambhibious) life is left stranded to mix with its inhabitants; both observe, just like Herzog's tricksy camera, the bad people do - in particular one close-to-rotten egg: drug-addled cop Terence McDonaugh (Nicolas Cage), on the trail of drug dealers who have murdered a family following a bust. He's half-heartedly groping for answers and full-heartedly scoring crack, and not really appearing to gain any joy from either.

Bad Lieutenant's plot idles along making equal amounts of time for dazed and confused interactions with a grab-bag of adrift characters (some stable, who initially appear dubious; some dubious, who were never stable to begin with) and the central aim of rooting out the city's criminal cause and exposing its fetid underside - tragically, an underside already visible. People come, go, flirt with the central narrative and occasionally impact upon it: Val Kilmer as Cage's cop partner, Eva Mendes as Cage's prostitute girlfriend, Brad Dourif as a bookie and - to a lesser extent - Fairuza Balk, Jennifer Coolidge, Xzibit, Vondie Curtis-Hall, Shawn Hatosy, Irma P. Hall, Shea Whigham and Michael Shannon (all good) each turn up to add an extra of dimension of calamity or fortuitousness to Cage's journey south. 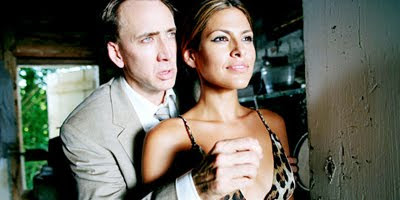 Nicolas Cage and Eva Mendes in Bad Lieutenant
But it's obviously Cage's film to wholly own: he's the film's over-emotional and over-energised epicentre. His performance is all over the place, but despite displaying some of his most outlandish quirks yet, it's never laughable (more laugh-with-able). He's a dervish of both disturbing and entertaining outbursts - whether simply giggling, through drug-induced fogginess, at the name 'G' during an interrogation, threatening information-withholding pensioners with firearms or almost maniacally enthusing to Mendes about a meaningful trinket - a spoon buried near his childhood hideaway (this scene, and several others dotted throughout the film - in particular the very last - contain a rather moving, melancholic tone that shifts the film temporarily out of place and add a touch of genuine, sentiment-driven feeling which I've not too often seen in a Herzog film).

I was enthralled by the way events almost inconsequentially stumble along, not really finding a foothold on a solid narrative path. The plot, like Cage, gets sidetracked and veers off down enjoyably demented avenues, with pitstops to pause for flashes of daft ingenuity - an alligator's POV of roadside carnage, a freshly-dead breakdancing corpse - which gleefully stand out like sore thumbs (and would stand out like twisted and torn up thumbs in anyone else's films) amid the sweaty, ragged grandeur of it all. Herzog is using Abel Ferrara's original Bad Lieutenant as a template, a jumping off point to make his own leaps into already-chartered territory. But he's still very much crafting his own film, filled with occasional visionary nuggets of inspired lunacy. (And all this raises the question of whether it results in a better film if the director doing the remaking has actually first seen the original or not - Herzog apparently claimed not to have - or if indeed this is actually a proper remake or not.) 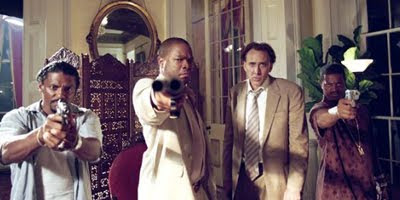 If, as some folk have said, it's just Herzog treading water or creatively doodling, biding time before his next fully self-derived personal film, then that's actually fair enough. What's wrong with a few small sketches between bigger canvasses? Some directors tread with style. (And I've never been one to fully back the idea of a filmmaker having "major" and "minor" works.) But if that's indeed the case maybe Herzog is simply wowing us with a sideshow for the interim, a spinning plates routine where he doesn't really care too much if any of them fall and smash to the ground. Once in a while it's creatively healthy to let things casually break apart. And Herzog, Cage and co. provide more than sufficient glimpses of magic for the duration.
Posted by Craig Bloomfield at 12:55