There’s always been a bit of noir-inspired thinking surrounding the titles in Shane Black’s screenwriting filmography: The Long Kiss Goodnight, The Last Boy Scout, A.W.O.L. and Lethal Weapon all sound like chapter headings that could've perhaps come from a Raymond Chandler novel (though the film is partially based on mystery writer Brett Halliday's book Bodies Are Where You Find Them). With Kiss Kiss Bang Bang though, he made that thinking a priority and used the famous Pauline Kael quote (in describing "the briefest statement imaginable of the basic appeal of movies" regarding James Bond movies) for his directorial debut.

The film itself isn’t as inspired as its title though. It's back-slapping and clever-clever, filled with a few tiresome Tarantino-inspired quips here and there, and with many action sequences that felt about a decade out of date. Hip and knowing? Not really. It's like a queered-up episode of Moonlighting without the naff charm, when it obviously wanted to be The Next Big Cool Thing. After an hour or so you can feel the credibility straining. Maybe being out of the loop for so long had harmed Black's sense of currency. (And it's perhaps telling that he hasn't written anything new since.) 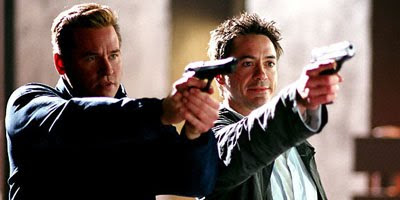 Kilmer and Downey Jr. proudly displaying their lethal weapons in Kiss Kiss Bang Bang
Robert Downey Jr. and Val Kilmer play, respectively, a small-time thief who gets mistaken for an actor and a gay PI, who join up to investigate a complex kidnap-murder case involving an Hollywood heiress. Both actors perform well together, but whilst some dialogue is snappy (“if you have a problem – hesitate to call!”), the characterisation is lazy. There doesn't seem any valid reason whatsoever for Kilmer's character to be gay other than the fact it - perhaps aroused through a scriptwriter's idea-less desperation - makes for an odd pairing with Downey's affably louse-like demeanor; and through this it aims for a few cheap, underhand laughs (it's a puzzle whether or not the filmmakers intend any of the gay-themed banter to seem underhanded or just guilefully playful). But Kilmer's character is more an embodiment of a comedy characteristic than fully-embodied character.

The (few) women in the film are either luckless, scantily clad starlets, grim-faced casting agents or needy fruit-loops (and not even interesting in their loopiness like Fiona Shaw was in de Palma's The Black Dahlia). Admirable female representation surely wasn't high on Black's list of priorities, but any noir - old or new - can rest or fall on how seductive, wily or fascinating its femme fatales appear. And here Black draws a blank. (Imagine Double Indemnity with Barbara Stanwyck's role played by, say, a post-rehab Lindsay Lohan - it doesn't work.) 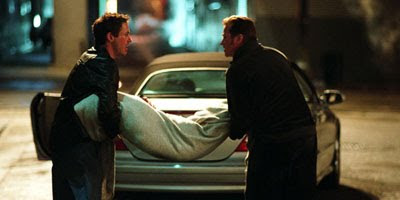 Kilmer shows Downey Jr who's the top in Kiss Kiss Bang Bang
Despite positioning itself as a '00s meta-take on the Film noir or crime film, it's just the same 'ol thing as before for Black but only with some well-placed narrative diversions to throw people of its faded scent. There's scant difference from this film and countless other boys 'n' their toys shoot-‘em-ups that got so tired years ago. It's an upgrading of Lethal Weapon etc with added Meta-jokiness. It wants to be so much more - but it’s not. The Long Kiss Goodnight, for – or actually because of - all its overblown daftness, was far more enlivening and entertaining ten years before this (and there a strong-willed Geena Davis got to take down bad guys whilst strapped to a rotating wheel!).

It aims to be noir remixed and restyled but hasn't got enough solid ideas, purpose or savviness required to make it truly take flight. It feels like Black skimmed through a dictionary of Film Noir terms and plucked out and inserted all the bits that would simply easily sit with his no-nonsense approach. It takes the tropes of noir at face value only, and reflects back nothing but a transparent collection of scenarios we've all seen before, and in better films. It's Brick for the older brother who will remember Black's screen work from its first orbit. And the only noir thing about him is his surname.
Posted by Craig Bloomfield at 17:32