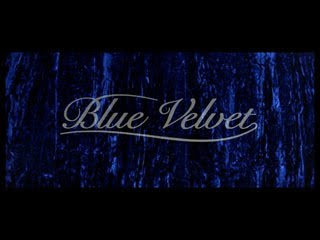 It's all blue. A swaying pair of curtains (blue velvet of course) - perhaps cut from the same cloth as the gown covering Dorothy Vallens' (Isabella Rossellini) bruised, beaten body, and, therefore, the strip snipped from it that Frank Booth (Dennis Hopper) fondles when she sings "and I still can see blue velvet through my tears" - move and ripple on a darkened stage. Or is it a floating barrier, shielding us from the deeper recesses of David Lynch's imagination?... Which he then parts anyway, to reveal to us over the following two hours just what goes on in his version of smalltown America: it's the doorway to severed ears, nightclub singers and the mysteries of love and Lumberton logs.

Lynch lives for these curtains - usually red, but here blue; deeply textured and hiding a world of waking nightmares. The film's titles appear slowly - very slowly - over these inky-hued drapes; all beautifully flowing in a whitish serif script - embodying film noir but with a Sirkian tint. They emerge (accompanied by the drum roll of Angelo Badalamenti's noirish '50s-inspired and -sounding main theme music) not quite letting on what Blue Velvet itself might be about, but bearing a promise of mysterious events to come: is it actually all down to the Bobby Vinton title song? Or is the meaning of the film's title, and indeed the fabric used to conjure it up, merely an early visual nod toward a plot maguffin - the kind to make Hitchcock grin from beyond the grave with glee? Or does it simply sound... just too dreamy?

The score and type together suggest a torrid romance, a heightened drama in a retroactive style (this was 1986 looking back at, and fused with, the 1950s); it could be a parodic glance back to the innocence of middle America three decades prior. But it's more deceptive than that: it's an opening that invites us fully into Lynch's smalltown detective story in a fateful, all-encompassing way. Because of how evocatively and suggestively Blue Velvet begins we all become budding detectives, budding Jeffrey Beaumonts.

The words and images that start Lynch's '80s masterpiece position us perfectly to enter into Frank and Dorothy's world. And by the time the words 'Directed by David Lynch' bring the titles to an end, and the blue curtains dissolve to reveal his stage to be the bright skies above the picket fences and neatly-ordered rose bushes of Lumberton, we know there's no going back. And in fact, we don't want to - however long it takes for the robins to finally come.

And remember: "Logs, logs, logs. Lumberton, U... S... A...!! At the sound of the falling tree, it's 1:30, and this is the mighty voice of Lumberton, the town where people really know how much wood a woodchuck chucks."
Posted by Craig Bloomfield at 20:21