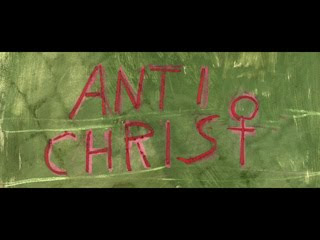 As with his 'certification of authenticity' title frame for The Idiots (under his self-proclaimed 'Dogme95' manifesto - each Dogme95 entry opened with the same 'certified' title shot bearing the film's name) von Trier's opening title for Antichrist appears as a still-frame intertitle - a scratched, chalk-marked board with the film's title crudely etched onto it in red (lipstick? Blood?); the final 't' fashioned into the female gender symbol. It's inserted suddenly onto the screen, unaccompanied by no other title information.

It's as boldly confrontational and attention-grabbing as von Trier himself is known to be - especially with his appearance at last year's Cannes Film Festival where Antichrist premiered (and where he archly claimed, with the film as his proof, that he was "the best director in the world!"). His provocation was duly felt; audiences and critics alike went ga-ga over his controversy-baiting exploration of a grieving couple adrift in a self-made 'Eden' somewhere in a godless, but stunningly photographed, backwoods.

Fantastical Mr. Fox says: "Keep Fox Hunting Banned!... Oops, too late. I mean, Chaos Reigns!"
I think that the impact of this title on an audience's perception and understanding of the film's themes and ideas is perhaps limited and negligible; it effectively stands out as aesthetically inspired from most opening titles (not many title shots feel both as goading and, at the same time, as throwaway as this one) but it's essentially a nifty visual ploy, accompanied by ominous sound design, to simply draw us into the mysteries of the narrative. But it works well: a complimentary red and green typographic concoction to lull us with visual fascination. As soon as the film's title appeared I was on edge: partly intrigued and partly reluctant to find out what was about to happen in von Trier's forest of female fury.

Self-disemboweling, talking foxes, close-up genital mutilation, leg-vs-millstone-based torture and an abandoned thesis on gynocide, and - to top it all off nicely - three chapters headed Grief, Pain and Despair, all get thrown into von Trier's mixing pot (he sure knows how to draw the crowds in, huh?), but I'm not sure if chaos exactly reigned though. I got the feeling that all of it - the self-conscious artiness of both the opening title and the resulting film itself - was all provocation with a side order of chest-inflated bluster. Maybe von Trier surely hoped the fox's words (as well as the audacious closing dedication to Andrei Tarkovsky) were meant as nudging directives to all the critics that to cry hellfire about his film. From the title onwards: was the devil merely in the detail?
Posted by Craig Bloomfield at 19:53