Goblin Wars/The Great Yokai War (Yôkai daisensô) Takashi Miike/2005
Take the best parts of The Dark Crystal, splice in some of the more sinister scenes from Labyrinth, then add the surreal vision of Japanese director Takashi Miike and you end up with GOBLIN WARS/THE GREAT YOKAI WAR, his first foray into family-orientated filmmaking. Tadashi (Ryunosuke Kamiki), a boy with an unsettled home life, becomes blessed by a festival dragon to be the Kirin Rider - a mystical title rendering him the chosen one to release a netherworld of goblins from the clutches of a vengeful force, the Yomotsumono, which is intent on creating hell on earth. Like a budding Camelot in Harry Potter clothing, Tadashi goes on a quest with a band of forest-dwelling Yôkai (spirits) to retrieve a sword and bring peace to the world. 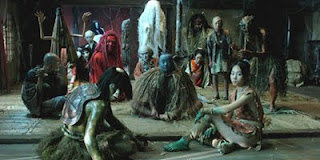 Miike’s film is a visual, illusory treat. It uniquely pits gigantic scrap metal CGI robots against a bizarre army of half-human/half-puppet creatures through numerous exciting confrontations in a warped variation of the Good vs Evil story. Dazzling photography - which illuminates apocalyptic reds in the inkiest of night skies - creates a fantastical arena in which childhood adventure is vibrantly turned on its head. It’s a strange, beguiling fairytale, sure to thrill adults and children alike - though it mixes some gory moments in with the comic escapades. GOBLIN WARS shows Miike as adept at youthful adventures as he is with his usual, darker fare. It contains a trace of knowing charm, too, with some cheeky references to both Indiana Jones and samurai films. Its lightness of touch delights even when it scares - especially in the moving and monumental final battle.
Posted by Craig Bloomfield at 23:06