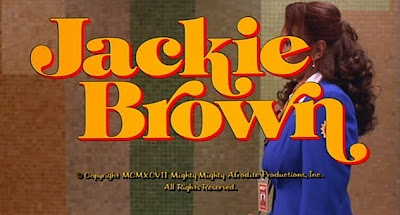 She's still foxy and she's still called Brown, but despite the clear and present allusion to one of Tarantino's obvious Blaxpoitation faves, we're some way off Foxy Brown. Jackie Brown is a film made in Foxy's image, an avid fan's homage to Pam Grier.

I finally saw it after years of thinking to not bother, having never been someone truly taken with QT's film world. I'm glad I did eventually see it, as it may just be the best thing he's done (along with a grab bag of bits from both Kill Bills): the smart-ass dialogue is kept to a minimum - and feels like it comes from the character's mouths, not his; it features his best selection of pop-soul hits (particularly a personal all-time fave, Bobby Womack's 'Across110th Street'); and contains two of his very best characters: Jackie herself and Max Cherry (Robert Forster).

I loved the opening: Grier on an airport conveyor belt for what seemed like a glorious eternity; the Womack song accompanying her as she elegantly glides throughout the entirety of the titles. Shot in profile in a blue Cabo Air uniform, and with unblinking gaze fixed on the distance, Grier commands the film frame right from the start. The yellow '70s-style - and very Tarantino - font appears bold, filling the frame, and constructed purely in the image of his inspiration. I'll take this over the opening strutting swagger of all those Reservoir Dogs any day. 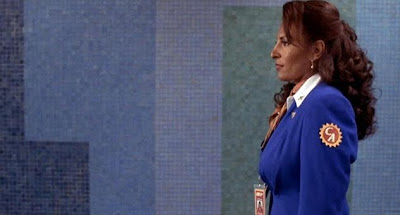 At this point I could only hazard a guess at what may have been on Jackie's mind; the shot is cleverly composed to make us ponder who she is and what might happen to her. This image is what we have; one long, uninterrupted take. By the end of the film, 154 mins later, Jackie and Bobby Womack are paired again. And Tarantino's most invigorating and thoughtful film ends on an image as striking as its first, and just a touch more wonderful: Grier's face, now in close-up, smiling and all the more knowing and relaxed for having now worked out what she wanted to do with her life. I was with her all the way.

And how is it that Grier wasn't nominated for a Best Actress Oscar for this? Forster grabbed a supporting nod, though didn't win (it should've been a lead nom anyhow), but nothing for Grier. And I'll remind you that Helen Hunt and Jack Nicholson both won for As Good As It Gets. What gives? Daft and wrong, right there.
Posted by Craig Bloomfield at 19:48