“Life is ephemeral,” states Caoimhe Butterly, a 24-year-old Irish peace activist, toward the end of Katie Barlow’s emotionally searing documentary VISIT PALESTINE. These three words sound resolutely frank yet hopeful coming from a woman who has spent years tirelessly aiding innocent Jenin civilians under attack from Israeli soldiers. Butterly knows just how temporary human life can be, having witnessed first hand the deaths of innumerable Palestinians (some of whom were her close friends) and by being a victim of the conflict herself; she was shot in the leg whilst leading groups of children to safety. 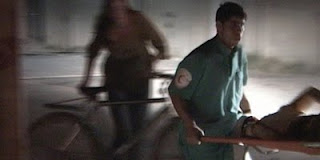 Death is an everyday occurrence in Jenin. Barlow critically and unflinchingly depicts this with an honest, responsive immediacy. But VISIT PALESTINE’s tone is also wishful; its message one of future hope. Numerous shots show how Butterly’s work has made a direct and integrally positive impact on the families, who see her not only as a friend, but also a saviour. The admiration is mutual, with Butterly being both tenderly loyal and fiercely protective of the people she’s committed to helping. The film sensitively relays deeply saddening testimonies from many victims’ families: one woman talks of her husband’s death with sincere candour - loss etched into her face. Barlow’s camera, like Butterly herself, intently absorbs every word; the moment is quietly devastating. VISIT PALESTINE is an important and much-needed film. It stands as a necessary testament to a singularly courageous person with an unwavering mission to do work that matters; one reason, of many, why the film should be seen.
Posted by Craig Bloomfield at 23:11