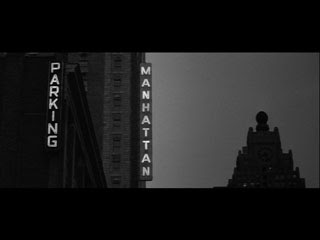 Since roughly 1977 Woody Allen has famously used the same opening title design for each of his films, but one of several of his earlier films to not follow the long-held tradition of using white EF Windsor Elongated or Condensed on black is Manhattan. (The titles for What's Up, Tiger Lily?, Take the Money and Run, Bananas, Everything You Always Wanted to Know About Sex* But Were Afraid to Ask, Sleeper, Love and Death and Interiors appear without Windsor - the rest, to the best of my knowledge, all use the typeface.) We just have the black & white image of the vertical signage accompanied on the soundtrack by his celebrated monologue ("Chapter One. He was as tough and romantic as the city he loved...") and that Gershwin score.

For a film which has always been very much an open love letter to New York, a celebration of its romantic spaces, for him to have used the same opening titles as in every other of his films would've lessened the romance he extols and denied us the pleasure of sharing in his wonder. We wouldn't have seen the city itself as the real central character of the film. It's all in the name. The monologue, music and beautifully chosen and composed shots of Manhattan work together as an introductory, and very arty, slide show, mapping out the places Allen (as Isaac) wants to take us to over the course of the film.
Posted by Craig Bloomfield at 22:20