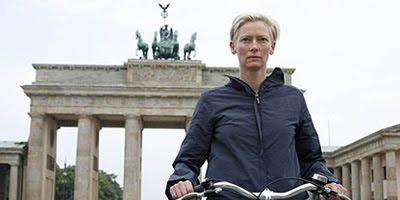 Back in 1988 filmmaker Cynthia Beatt documented actress Tilda Swinton as she cycled the 160km length of the Berlin wall. The journey, filmed from a West Berlin viewpoint, showed their particular view over the wall into East Berlin. The 30-minute film, Cycling the Frame (1988), depicted in poetic terms the city before the wall came down on November 9, 1989. Last year during June, and twenty-one years later, Beatt and Swinton made a follow-up film, The Invisible Frame, shot in 18 days and now double its predecessor's run-time. In it Swinton, again on her bicycle, retraces the line that the wall once made across Berlin. This second film picks up on Swinton's reflections made over two decade's ago, and adds new thoughts on what the wall meant, what it stood for and what Berlin is like as a place now. But The Invisible Frame isn't really a sequel. In Swinton's own words, it's more "the print of a second foot, twenty years and a wall's fall later".

Their filmed tour makes stops in a series different locations in and around Berlin that are significant to the city's history. Roughly, in order of visit, they are: the Brandenburg Gate; the former border crossing at Invalidenstraße along the Spandauer Schifffahrtskanal (where Swinton passes a memorial stone laid in honour of Günter Litfin - the first escapee to be killed after the wall's erection); Invalidenfriedhof, a cemetery once divided by the wall; the fields of Lübars; the nature education trail at Eichwerder Steg; The allotments in the Brehmestraße; Pankow Park; former (now deserted) border guards barracks at Ruppiner Chaussee; the Eiskeller observation deck; a 1000-year-old oak tree at Schlosspark Sacrow (reportedly the oldest tree in Potsdam); an accessible S-Bahn crossing; a fenced-in section of wall at Rudow; high-rise tower blocks in Kiefholzstraße, former West Berlin; and dotted amongst all this we see assorted memorial crosses, electrical power substations, wheat and poppy fields, rivers, bridges, water treatment plants and houses - quite a collection of pit stops for just over two-and-a-half weeks. All locations visited are historically relevant places tainted with a deep and troubled history. Seeing them - as they are now - filtered through Swinton's and Beatt's moving and meditative film is a thought-provoking experience. It shows much of the city away from the Berlin usually presented and preserved on film - places we'd maybe not get to see elsewhere, outside of retracing Swinton's retracing of these places, which, after being fully taken with the film, is something I'd love to do myself. 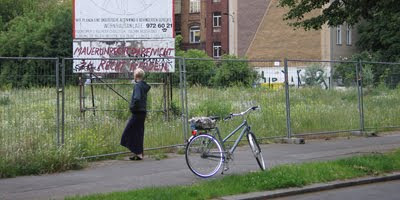 Apart from being drawn to the film due to Swinton's presence (I'll gladly watch anything with her in), I was intrigued by The Invisible Frame for two other reasons: in April last year I visited Berlin for the first time; and during November BBC2 screened Matt Frei's excellent three-part documentary series, Berlin. My three-day trip took in some of the areas that I would later see Swinton cycle through in the film. (Namely, the Memorial to the Murdered Jews of Europe situated in Friedrichstadt and the Brandenburg Gate.) Matt Frei's films gave solid and expert context to the city's history, with riveting factual analysis filtered through personal recollections. (Frei is German by birth; his parents still live in Berlin.) Seeing these places, and more besides, later onscreen - and aptly summed up via Swinton's poetic and openhanded voiceover narration - added a retrospective weight to what I saw, and made me hanker for a second visit. The intelligent and thoughtful descriptions of these places, however briefly they appeared in the film, reminded me how truly significant Berlin as a city is: it's a vibrant, sprawling and forward-thinking place.

Beatt's knowledge of Berlin is watertight. Every camera move, directorial decision and individual shot feels organic and rightfully aroused by the various fluctuations of the tour. (Certain parts of it may have been pre-planned, others happenstance.) There is a plethora of meaningful detail contained in each image - such as that earlier memorial stone for Liftin being later referenced by a shot of Swinton reading a memorial plaque (for Marinetta Jirkowsky, one of the last people shot attempting an escape), and a poppy field which used to be the site of a death strip. Although these things aren't stated overtly by either Beatt or Swinton, but observed and picked up by the camera's gaze, and through natural collaborative experience. It's, perhaps, Swinton's simple instincts - blended with Beatt's extensive research - that make everything work harmoniously. Also, British composer Simon Fisher Turner (who worked regularly with Derek Jarman) has created staggering sound design and musical score by using original/found sounds from the travels. Each piece that accompanies the different stages of the journey finds a perfect rhythm in accordance with the images. 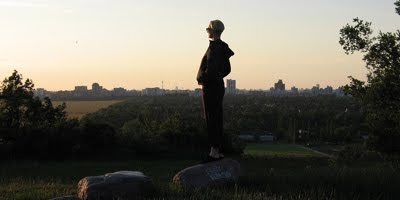 It is the most directly affecting form of documentary filmmaking: an openhearted and deeply moving literal document; film as a map of a city recorded in motion, with many pauses at opportune moments along the way. It flows freely, taking in sights and sounds all at once and in many directions, as someone does when they ride a bike. (Cycling is the right mode of transport for it - a car or train wouldn't have allowed the film half its freedom of movement.) The result is that we get a pure sense of the city as it is now, seen through the fog of its past. And it's a sensuous film in every way: our sensory faculties impulsively pick up, though obviously at a vicarious remove, what Swinton's do. History, a city and an actress on a bicycle, twice. These two films made just over twenty years apart make a simple and poignant point. Now, though, I'd love to see a third film. On yer bike, Tilda!

(For more information about The Invisible Frame, visit the film's website here)
Posted by Craig Bloomfield at 17:01